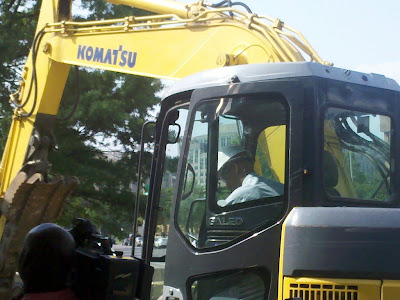 a revised version of my message to this project's developer's web site:

From the illustrations on your web site it appears that the northernmost portion
encroaches upon U.S. National Capital Planning Commission's proposed I-395 tunnel.

What consideration has been given to ensuring that the development does not impact the tunnel?

Douglas Willinger
A Trip Within The Beltway

The numerous 'planning' faux pas with jamming the nearby Capital Square townhouses a mere 16 or so feet from the SWS Freeway retaining wall, and the Golden Rule senior citizens' apartment building in the path of the not yet employed northbound I-395 Center Leg Tunnel on ramp can only make one suspect the worst- that the building to the left will be driven into the ground with the utter contempt for NCPC's Washington Channel Tunnel, as much as Nationals Stadium did to the route of the previously proposed South Capitol Street corridor tunnel.

Apparently Washington D.C. is utterly lacking in any sort of prevailing political order worthy of displaying architectural tools as a logo.


Posted by Douglas Andrew Willinger at 12:25 AM No comments: