This was the day of his final press conference.

His I-95 dedication speech may be read here.

It was 35th U.S. President John F. Kennedy who took an interest in the development of the Washington, D.C. freeway system, particularly regarding the north-south inside Washington, D.C. segment of planned I-95

JFK was apparantly more hands with the planning than predecessor Eisenhower
http://wwwtripwithinthebeltway.blogspot.com/2010/03/eisenhowers-burning-tree-commute-desire.html

http://cos-mobile.blogspot.com/2009/12/how-jfks-dc-north-central-freeway-was.html
Posted by Douglas Andrew Willinger at 12:00 AM No comments: 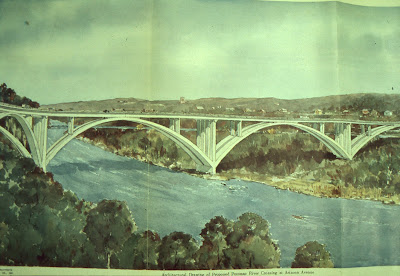 Discussed in a recent article at Greater Greater Washington.

Illustration from a 1957 Northwest Freeway Report.