The U.S. FHWA document "Finding of No Significant Impact for the I-395 Air Rights Project" FAILS to acknowledge the significant impact of the Capitol Crossing Air Rights Project in permanently blocking off 50% of the I-395 8 lane sunken right of way.  This includes pinching the median shoulders, impacting safety and the feasibility of the yet to be built freeway connections at its northern end; and the further impacts upon livability and future development potential along the New York Avenue corridor. 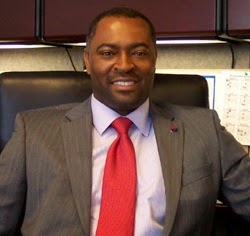 
The "Finding of No Significant Impact for the I-395 Air Rights Project"statement neglects to mention the permanent pinch of the I-395 Center Leg design right of way, placing walls with load bearing columns directly within the right of way, impacting flexibility for accommodating connections rather than keeping I-395 forever truncated at New York Avenue.

Neglects to mention safety.  Fails to mention the permanent pinch of the median shoulders.

It also neglects to mention the permanent of the overall right of way, forever denying the use of the outer 2 lanes in each direction as if assuming that I-395 would never be extended, nor that the connecting east-west interstate highway, the I-66 Tunnel primarily beneath K Street would ever be built.

Each underwent massive redesign from unpopular earlier planning to comply with concerns over building displacement and permanent impacts by being re-routed and redesigned as tunnels primarily beneath existing street right of way.

I-66 Tunnel with interchange with Center Leg

The northernmost Center Leg Tunnel segment was designed to connect with these later plans, with a pair of 3 lane connections for the I-395 extension and a pair of one lane connections to the I-66 Tunnel.  Though appearing to be a 4 lane facility, the northern I-395 Center Leg Tunnel is actually an 8+ lane design with non-load-bearing knockout walls that were added in a second construction phase, as noted by the expansion joints visible atop on K Street. 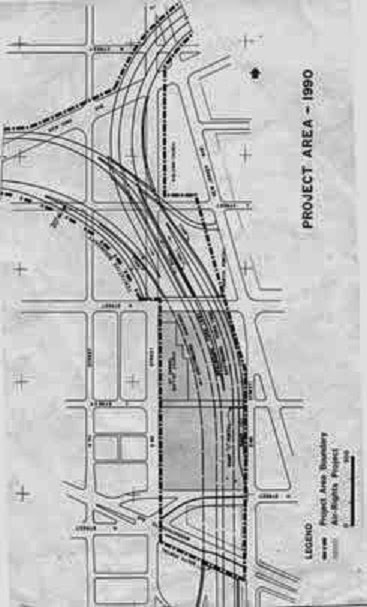 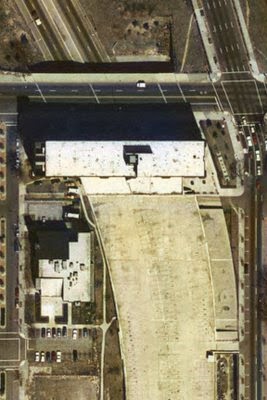 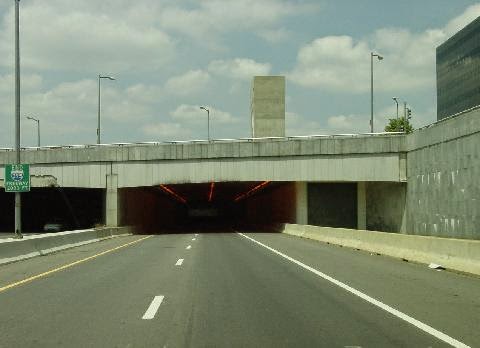 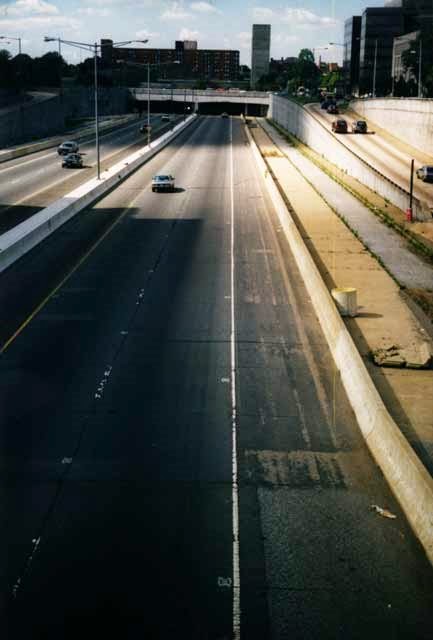 On December 29, 1976, Mayor Walter E. Washington requested the withdrawal of two more segments from the Interstate System: (a) the portion of I-66 between I-266 and I-395, and (b) the I-266 Three Sisters Bridge over the Potomac River to the Virginia State line. The two route portions total 2.50 miles.

On August 7, 1978, Mayor Walter E. Washington requested the withdrawal of portions of the East leg and North Leg Freeways (I-295 and I-395).

The reasons given for this by Peter S. Craig, a one time Covington & Burling attorney on behalf of the "Committee of 100 On The Federal City" were:

"... Section 137(b) of the Federal-Aid Highway Act of 1973 (codified as 23 U.S.C. 103(4)), which authorized the Governor (Mayor Washington, in the case of D.C.), and the responsible locally elected officials (the D.C. City Council) to jointly request the U.S. Department of Transportation to transfer federal aid, formerly earmarked for freeways, for 80% of the cost of transit improvements. Such fund transfers may occur on either of two alternatives:

First, that the Interstate segment being deleted "is not essential to the completion of a unified and connected interstate System."

Second, and independently of the first reason it, freeways may be deleted and the federal aid transferred to mass transit -- even if the freeway segment might be deemed essential for a "unified and connected Interstate system" if such freeway segment "would not be essential after completion of one or more substitute public mass transit projects." See 23 C.F.R. 476.304(3).

(5) North Leg-West Section of Inner Loop (K Street Freeway)(I-66). This Council already has urged that Virginia abandon I-66 inside the Beltway in Virginia. Consistent with this action, I-66, within the city should also be scrapped.


A finding of "not essential" means the I-395 being forever truncated at the intersection of 4th Street and New York Avenue NW: a situation not meeting the definition of a unified and connecting interstate system, that somehow pretends the WMATA rail system not as a supplement but as a replacement for somehow handling the mass of vehicular traffic to and from the northern edn of I-95 along New York Avenue.

The Craig memo additionally gets it wrong about I-66: since Virginia DID build inside the Beltway I-66 through Arlington, than constructing the I-66 Tunnel within Washington, D.C. is essential for a unified and connected interstate highway system, along with the I-395 (I-95) connection-continuation, along New York Avenue to MD 50 and/or the general JFK B&O Route , and arguably as well the I-295 East Leg Inner Loop to RFK Stadium and the SE Freeway.

The "Finding of No Significant Impact for the I-395 Air Rights Project" completely neglects the matter of the unbuilt freeway segments that were so "de-mapped".  It further neglects the matter of more recent official planning starting in 1996 with a report by via the DC Mayor's Office under Marion Barry for an I-395 New York Avenue Tunnel within and beneath that Avenue's existing 134 foot right of way showing a 4 lane extension, though with sufficient space for a 6 lane version with no reason given for the arbitrary restriction to only 4 lanes total. 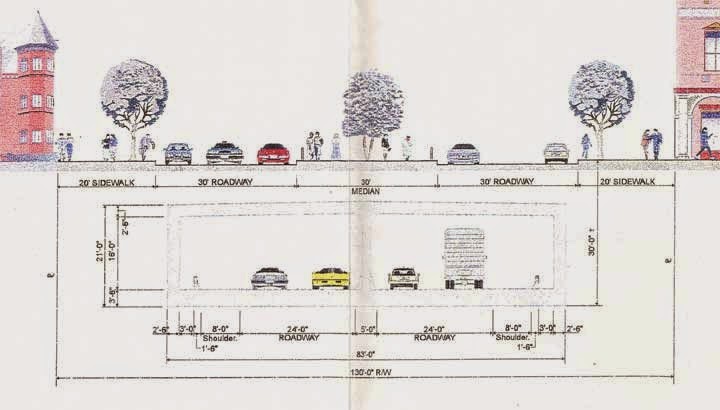 NOT building the I-66 Tunnel and the I-395 (I-95) negatively impacts the neighborhoods along New York Avenue and additionally adversely affects development potential along that New York Avenue corridor: additional factors NOT considered by this FHWA "Finding of No Significant Impact for the I-395 Air Rights Project".

The FHWA "Finding of No Significant Impact for the I-395 Air Rights Project" signed by D.C. Division Administrator is a false document.

As the I-395 Air Rights Project rests upon this document, it should be barred from further construction, until its design is modified to fully respect the 8 lane plus shoulders Center Leg right of way.

Posted by Douglas Andrew Willinger at 12:14 AM