Building upon what might have been the JFK Vision.

"Significance of Using B&O Route. Use of the Baltimore & Ohio Railroad corridor to bring Routes 70-S and 95 into the city is the key to meeting the need for additional highway capacity in northern Washington, Montgomery County and northwestern Prince Georges Counties and at the same time avoiding the substantial relocation of persons, loss of taxable property and disruption of neighborhoods that would result from construction of the Northeast, North Central and Northwest Freeway proposed in the 1959 plan. Further savings are realized by placing the rapid transit line to Silver Spring and Queen’s Chapel in the same railroad corridor."

Design proposals for Boston Inner Belt- JFK was originally from the Boston area. 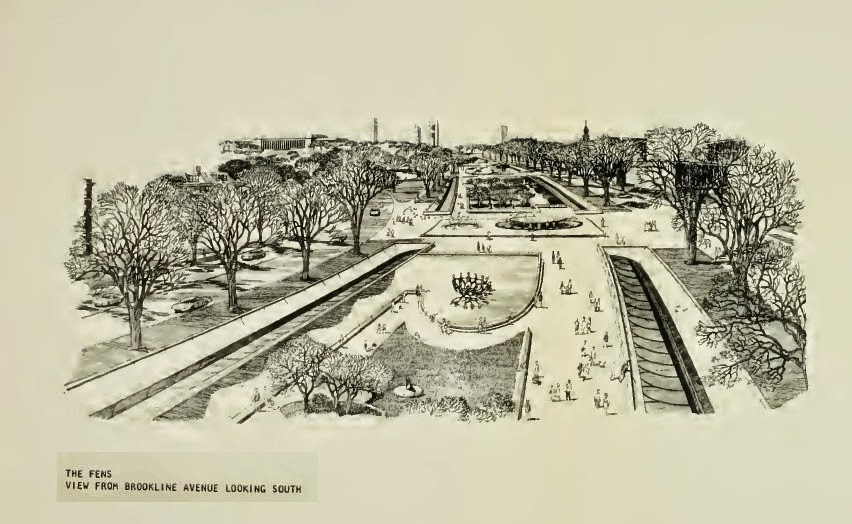 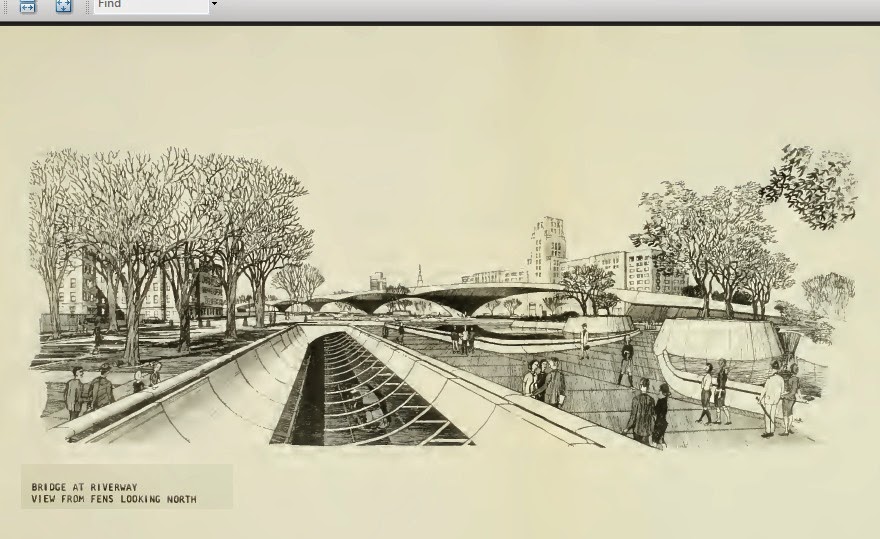 The highway was scuttled following the JFK assassination:


Whatever study that was to come out in summer 1963 fulfilling that vision probably was never released.

What was released in 1964: a monstrosity: 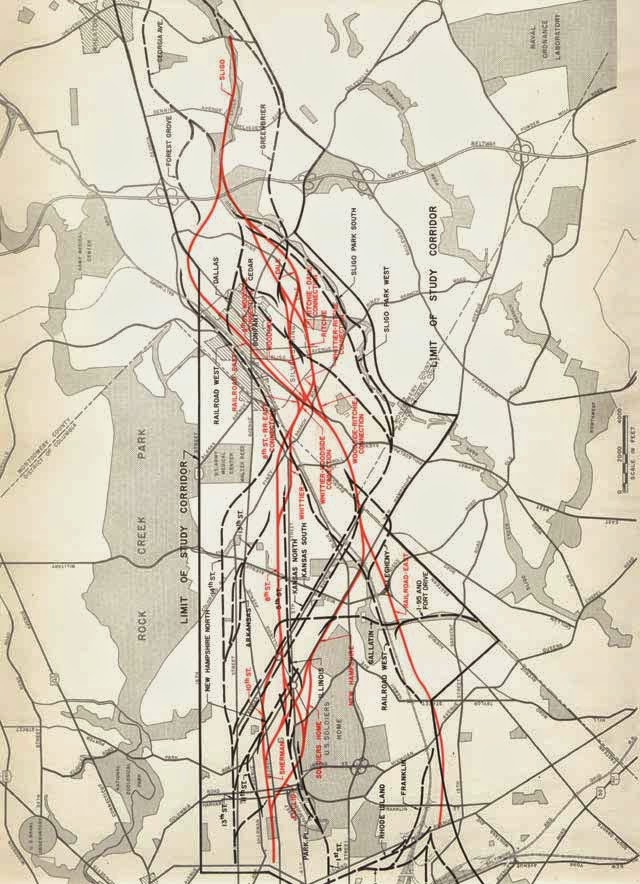 A plan more compatible in 1966 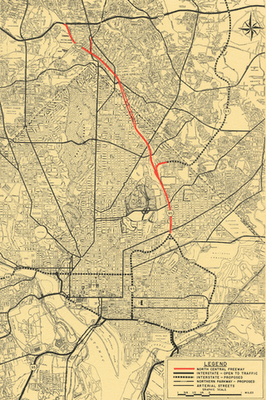 Was last studied in 1971 with plan with some good ideas, yet introducing new objections

A Trip Within the Beltway creator to be begins exploring un-built DC I-95 having been fascinated by it starting at the age of 9 with a 1972 visit to Washington DC, seeing the truncation, hearing the phrase no white mans homes through black mans homes from a hotel worker at the Howard Johnson in Cheverly, Maryland and wondering 'what about that giant power line right of way alongside and continuing past the I-95 truncation at the Beltway?  Studies the entire PEPCO-B&O route and wonders how such a highway could become so controversial and asks what about a revival upon a design update incorporating lessons learned here and elsewhere.

Studies the Boston Big Dig project, and by 1995 discovers the Grand Arc concept of a vast new green-way extending northward from the rear side of Union Station with underground highway connecting to the existing truncated I-395 Center Leg.

Writes about it in piece published in the July 1997 Takoma Voice.


Explains how canceling DC I-95 transferred burden elsewhere and develops the Alexandria Orb as mitigation design for extra wide Capital Beltway in Alexandria Virginia which appeared on the front page of the Alexandra Journal December 18, 2000.


Developed the Highways and Communities website inaugurated in April 2000- now available on Wayback Machine with history of the Washington D.C. freeway system, with the work incorporated into the blog inaugurated in December 2006- "A Trip Within The Beltway".

Corrects operation-ability issues of 1966+ design with insufficient tunnelization and capacity with new design that employs both sides of the railroad, particularly in Brookland with southbound lanes in new cut and cover tunnel directly alongside CUA beneath --- speaker of the house drive- thus making the spectacular view through the windshield at a portal immediately south of Franklin Street,employing under utilized lightly developed industrial properties between railroad and 9th Street thus increasing capacity while avoiding demolition of homes in Brookland along 10th Street that had been actively protested by anti freeway ECTC protester during the late 1960s.

Adopts a never officially considered alternative routing for the connection to the built Center Leg via a double level tunnel beneath O Street that would arc beneath the recreation field of Dunbar High School and the intersection of New Jersey Avenue and N Streets NW, reducing dwelling displacement from the 600+ of the 1971 plan for a cut and cover tunnel alongside the north side of New York Avenue to as few as 33, while providing superior geometry.

Extends the Washington, D.C. monumental core northwards from Union Station as the Grand Arc Mall headpiece, extending Union Station's walls as this new linear park's frame decorated in the style of the walls near the Capitol building, enclosing the freeway and railways- the latter with space for additional tracks, bringing the New York Avenue crossing to grade and overpassing Rhode Island Avenue before the rail-tracks adopt a gentler grade northwards to pass lower to descend into a bored tunnel past 16th Street in Silver Spring, to allow the Grand Arc Mall to pass at grade through the Brookland and Takoma area, with the WMATA rail climbing to employ the existing historic railroad overpass of Georgia Avenue.

Would re-surface the Tiber Creek that had been covered over by the railroad and industrial development.

It would completely underground the I-395 or rather I-95 extension to a point north of Taylor street and again going underground to a split beneath a traffic circle at New Hampshire Avenue.  From there, I-395 or I-95 would tunneling along that Avenue's north side taking advantage of he open field of the Eastern Star Masonic home (where 110 houses where only recently erected in contempt), displacing some 27 pre-existing houses within the 1,600 foot long segment between the B&O - Grand Arc corridor and the District-Maryland line.  There the highway would emerge from beneath a new gateway traffic circle at New Hampshire and Eastern, and continuing as a combination of open trench and coverway for another 1,600 feet before swinging beneath and to the south of a new bridge carrying New Hampshire Avenue where the topography drops to swing onto the PEPCO corridor northward to the I-95 stubs at the Capitol Beltway.

The I-270E extension meanwhile would continue via the B&O-Grand Arc corridor with a brief open trench before again entering a tunnel beneath the new linear park corridor passing beneath a Takoma Station Town Square, and into Maryland, where the WMATA red Line would emerge to rise up and employ the existing 16th Street overpass, with the heavy rail underground until just west of 16th Street., where the freeway would have a cut and cover spur northwards beneath 16th Street and Georgia Avenue, transitioning perhaps to a drilled extension, while the mainline would continue as part coverway - part trench to meet the Capital Beltway to and from the west.

Extra capacity upon that segment of the Capitol Beltway to the existing eastern I-270 spur could be provided by a widening that purchases the houses immediately alongside its south side for a new park covered cut and cover tunnel constructed before relocating the exiting Capital Beltway lanes likewise into a new cut and cover tunnel that would improve the geometrics while expanding Rock Creek Park.

Would be built with 4 separate carriageways underground south of New Hampshire Avenue, with the southbound lanes doublestacked in the cut and cover tunnel alongside CUA, and connect with both the Center Leg and the East Leg- the latter built as a box tunnel with new boulevard atop.


Posted by Douglas Andrew Willinger at 4:40 AM