Simply converting the eastern portion of the SE Freeway to a boulevard increases vehicular-pedestrian conflict, and is totally unnecessary, as evident from the cross sections in the Middle Anacostia Transportation Study, seen here [warning- PDF] at page 35 "Boulevard Typical Section #2 - Looking East towards Barney Circle".

Evidently the topography favors covering over the existing freeway, with the new boulevard atop; not shown is the idea of covering the RR nor extending the cover towards the Anacostia River with a terrace/staircase, as already done at the Lincoln Memorial. As this involves covering the existing freeway -- IOW no new depressing -- this is a comparatively cheap freeway under-grounding, unlike say this freeway to the west between the 11th Street and 1th Street Bridges.

The idea of covering the segment of this freeway between 14th and 15th Streets SE appeared in this late 1960s illustration seen here.

Continuing this cover westerly requires removing the elevated approaches to the 11th Street Bridges, something that I propose with a replacement with below grade approaches that would conflict with the existing heavy RR, though compatible if converted to vehicular traffic or lighter rail which can tolerate grade changes upwards of 5% whereas heavy RR can only tolerate a 1% grade. As with the highway, this railroad right of way is coverable.

Continuing this cover easterly to Barney Circle would be feasible with allowances for the ramps.

Likewise, the topography allows such a relatively easy under-grounding for this freeway's needed extension to RFK Stadium- East Capitol Street, and is fully compatible with planning for a slow speed waterfront boulevard atop, including the idea of a traffic circle at Massachusetts Avenue SE. Here to the railroad should also be covered. 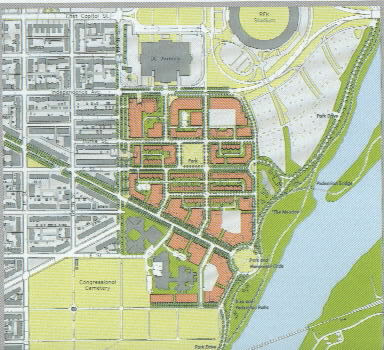 Only those promoting a mindless ideology against urban freeways -- alas those traditionally in control of the governments -- would rather place all of this vehicular traffic upon the surface waterfront boulevard.
Posted by Douglas Andrew Willinger at 1:07 AM No comments:

From the JD site:

Then there's the bridges: Reconstruction of the 11th Street Bridges is scheduled to begin in mid-2009. (The shortlist of firms vying for the design-build contract was announced a few weeks ago.) Whether we actually see heavy equipment moving in mid-2009, or whether this just marks the first part of the design-build project is not quite clear. I was also told that the contract to demolish the flyover ramps to and from RFK could be completed soon, and that demolition would happen not long after the contract is signed.

Plus, the final Environmental Impact Statement for South Capitol Street and the Douglass Bridge is expected in spring 2009; that's when we'll hear which of the four bridge designs has been chosen.

This fatally flawed project -- RFK ramp demolition, eastern SE Freeway boulevardization with traffic lights, and replacement with new elevated ramps -- needs to be stopped and seriously re-planned... as currently proposed the project fails to pass even a laugh test, as so with the controlled opposition that focus only upon the increased public utility of the connection to the Anacostia Freeway.
Posted by Douglas Andrew Willinger at 3:04 PM No comments:

The Town of Chevy Chase Town Council voted unanimously at a Thursday night meeting to hire a law firm on a pro bono basis to analyze a state report on the Purple Line.

The above is curious. If the firm is working for them on a pro bono (free) basis, do they really hire them? I don't know, as I am not a lawyer, and I don' t play one on T.V.

And any Maryland municipality that has the string Chevy Chase in its name is not exactly my idea of a place that needs free legal help anyway.

Are they a CAVE (citizens against virtually everything) law firm?

Doug Willinger, have you run across this firm in your research into anti-highway activities elsewhere?

I have not researched Sidley Austin, though in checking out their Wikipedia entry I found this:

I do not have time right now to continue this research, but have already researched that power house Pennsylvania Avenue law firm Covington and Burling and have turned up much (C&B just happens to be involved with practically everything I have blogged about.

I suggest similar lines of research upon Sidley Austin, including its founders and their fraternal memberships.

"Albert C Stevens (the respected historian) also makes this interesting connection between the Masonic Kappa Sigma society, founded in 1867 at the University of Virginia, and Skull and Bones. On page 355, Stevens states, “The badge [of Kappa Sigma] is an inverted crescent of gold, attached to and below which, by four of its points, is a five-pointed star [the pentagram] with the letters Kappa Sigma in its center…. At the top, on the crescent, a skull and bones are engraved; at the left, the crossed keys [a symbol of the pope’s power], and at the right, crossed swords.”[17] Is this all mere coincidence?"

I highly doubt that that Chevy Chase Country Club is the only example of a disproportionate influence of entities who control a particular piece of real estate.

Note for instance CUA, as well as that "Order of the Eastern Star" property that connects the I-95 PEPCO-B&O Routes, which just happens to be the entity which hosts the Committee of 100 Christmas Party (an organization that is notoriously anti grade separated highways).

I suspect this is just the tip of the proverbial iceberg.

Posted by Douglas Andrew Willinger at 2:17 PM No comments: