A few miles outside the beltway

A very good, interesting and somewhat misguided article within the blog Greater Greater Washington that IMHO represents a doctrinaire bias against urban freeways akin to insisting upon single level ranch houses because of a lack of imagination to properly design stairs- blind them to the potential- despite the clear examples of urban friendly grade seperation ala beneath DuPont Circle.

The concepts of more dense development and a more pedestrian friendly design are valid and contrary to the articles' presumption, are NOT necessarily mutually exclusive with the also valid concept of improved traffic flow. Remember DuPont Circle and the conversation in Greater Greater Washington to cover the open depressed portion of the DuPont Circle's Connecticut Avenue approach?

NO one calls for filling that in and closing off the underpass for the sake of restoring a more pedestrian friendly DuPont Circle!

The basic design of the Montrose Parkway underpass/MD 355 overpass (bridge) is actually basically sound, with the proper basic dimensions avoiding wasteful demolition, as a foundation for a more holistic plan extending both sets of concepts above.

All of this can be done in stages.

Add semi circle covers alongside the existing bridge to create the shape of a traffic circle. This can have any of a number of possible design configurations, and may retain the existing 355 straight through roadways. Below is an illustration of this concept of such a bridge with the additions of a pair of semi circles from a study on Washington, D.C.'s New York Avenue. 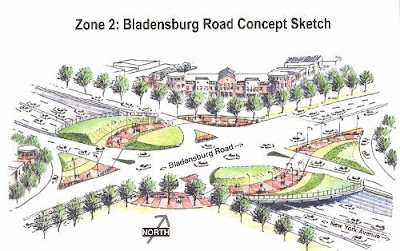 My preference would not be an SPUI configuration, as that would create lengthy surface ramp stringing that would be the anti-thesis of a friendlier for pedestrians environment, and we want development lining the space along the depressed expressroad, rather than uncovered as here shown; rather I would perhaps retain the existing Montrose Parkway traffic light intersection just east of 355, with a master plan accommodating later adding a set of redesigned left turn ramps, such as with a circular roadway ramp that drops below 355 to continue onto Montrose Parkway westbound, to best allow air rights development atop Montrose Parkway on both sides of MD 355.

Alas, the conversation has been dominated by the relatively well funded establishment foundation type organizations with their devotion to doctrinaire attitudes against the very concept of grade separated urban highways, with justifiable outrage over various elevated freeways used as a slippery slop argument to foolishly waste existing below ground level roadways by filling them in rather than covering them- as if placing all of the traffic upon a single level was somehow more pedestrian friendly, while avoiding any discussion of design details.

The author of that piece, Rollin Stanley, Director of the Montgomery County Planning Department, and blogmaster of "The Directors' Blog" further confirms, in a follow up piece in Greater, Greater Washington, my charge that the new urbanist movement, specifically the reletively well funded and connected foundation type entities, promote an intellectual slippery slope argument blurring dislike of some elevated freeways into a dislike of all urban freeways. Key to this is the confusion of those that are elevated, with those below ground level, altogther neglecting to even acknowledge that those are compatible with being lidded (covered):

"Maybe 20 years from now the Montrose underpass may be MoCo's elevated expressway. The mistake realized decades later in places like Seattle, Toronto and San Francisco, where lots of money was invested to reverse the damage and open up new opportunities for creating better environments for people, not autos.

Several years ago, a portion of the one elevated expressway that reached downtown Toronto was torn down, about 1.5 miles of it. Support is now building to take down the rest. This is one of the locations around the world where the benefits of tearing down 1950/'60s era transportation infrastructure has and will open up new economic opportunities that also meld well with the greening of urban areas"

Such is the very sort of nonsence promoted by entities as the Congress for New Urbanism, blurring together the elevated versus the below ground level:

As an example of this deceit, see this video at 3:33 where they begin talking about the elevated freeway in Buffalo, N.Y., while flashing to images of the below ground level Kensington Expressway which locals want to make into a tunnel, yet such foundation type organizations have entered the scene by pushing the wasteful idea of filling in the trench and placing all of that corridor's traffic upon an 8 lane surface street.

Rollin's complete failure to even consider the positive potential of this underpass as a foundation for a more urban local environment, is like attempting to hammer a square peg into a round hole of a rigid ideology that is clearly wrong- imagine DuPont Circle today without its Connecticut Avenue underpass-tunnel. All for a pseudo intellectualism akin to rejecting any buildings other than those single level, owing to an inability to imagine-design staircases, yet pushed through societies of those perhaps more yoked than free as somehow 'progressive' and 'futuristic'.

Redevelop the 355 overpass into a circle with adding semi-elipes on each side, and lower Montrose Parkway to the west beneath a new such overpass for Hoya, for ultimately developing the land atop. Urbanism does better by forcing design innovations involving multiple levels for accomdating and reconciling greater levels of human activity - rather then to simply serve fewer people -- aka elitism.
Posted by Douglas Andrew Willinger at 10:25 PM 1 comment:

They Started Building Too Close To The RR AFTER 911

The U.S. govt says that foreign terrorists were planning to derail trains

Yet, they permit new residential real estate development creating a particularly dangerous situation, just inside of Washington, D.C. with its main north-south RR

Think about the development at the Takoma WMATA Station- the Elevation 314 and Ceder Crossing projects, built AFTER 2001, with dwellings well within a RR derailment crash zone, even at elevations lower then the heavy RR!

Go to the Takoma D.C. WMATA Station to see for yourself.

What sort of government permits such such nonsensical development lacking safety buffer zones, which places people unneccesarily at risk for the sake of an agenda of further blocking parallel cut and cover roadway tunnels -- whether vehicular or rail -- for the sake of deferring to this corridor's past botched planning for its most wealthy and selfish property holding entities simplistic anti-freeway mania?

What is Wrong With the Pentagon?
http://cos-mobile.blogspot.com/2011/02/what-is-wrong-with-pentagon.html
Posted by Douglas Andrew Willinger at 9:48 PM 1 comment:

The Sin of building toooo close to the railroad,
chocking JFK's B&O D.C. I-95 corridor 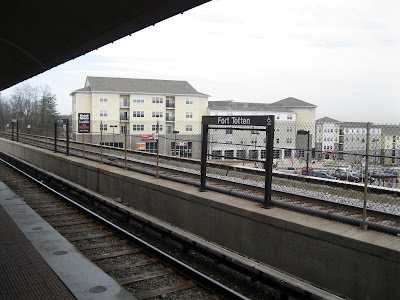 This is where D.C. I-95 was to turn from alongside the B&O Metropolitan Branch/C.S.X.-WMATA RR to the Fort Drive route between Gallatin and Galloway Streets, or, as per the superior PEPCO route starting near Ray Road, connecting to such by continuing further along this RR before turning away to parallel the northern side of New Hampshire Avenue, running through the field of the Masonic Eastern Star Home.

A Sampling of Attitudes Towards D.C. I-95
http://wwwtripwithinthebeltway.blogspot.com/2007/02/sampling-of-attitudes-towards-dc-i-95.html

Shadow Government Dynamics
http://wwwtripwithinthebeltway.blogspot.com/2010/05/telling-indifference.html
Posted by Douglas Andrew Willinger at 12:01 AM No comments: