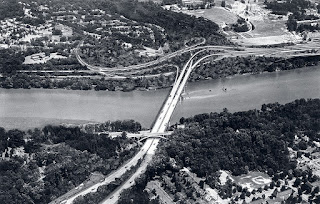 "Rendering of the Three Sisters Bridge, which would have linked with interstates and erased three well-known areas of DC. Photograph courtesy of DDOT."


hyperbole article "The Insane Highway Plan That Would Have Bulldozed DC’s Most Charming Neighborhoods" by Harry Jaffe | October 21, 2015

The Three Sisters Bridge would have "erased" zero neighborhoods.

The outright 'de-mappings' of the Washington, D.C. freeways system was not about saving neighborhoods.

The plans underwent serious revisions, most notably with the cross town I-66 North Leg, replacing the 1955 plan for a new swath along U Street, with a tunnel under K Street that was promoted by opponents to the earlier plans.

The outright 'de-mappings' were based upon specious 'reasoning'.

Rather it was about keeping freeways further away from major religious institution properties, to wit, Jesuit Georgetown University with the Three Sisters Bridge, as well as Catholic University of America, with the indisputably needed North Central Freeway.