the increasingly obsolete 'Committee of 100 on the Federal City' now suing to push much needed rail freight away from a tunnel alongside more affluent neighborhoods north of the Anacostia River, and into an above ground right of way alongside poorer areas east of the Anacostia River at a cost of billions for an all new crossing of the Potomac River!

"The group alleges that the environmental review did not consider using the CSX-owned right-of-way at Shepherds Branch, which the District Department of Transportation has proposed using for the streetcar system."

How is that even an option? That ROW is on the other side of the freaking Anacostia River. How the hell would they connect the two without destroying a ton of property and building another bridge over the river? Why should they even consider that, when all they need to do is just widen a fucking tunnel?

Are they proposing to rebuild the World War Two era bridge of the potomac to alexandria?

These people want to move the rail traffic to SE and a minority neighborhood? To make this even more weird, they must not understand rail operations, because once above ground, the noise of the trains will be loud, loud enough to travel into their neighborhood for years and years to come, especially the horns as the trains cross the many streets (including Penn Ave) the proposed route will take. And they want to have another bridge built across the Potomac?

The Committee of 100 is the organization that in 1968 proposed relocating proposed I-95 to run upon a longer route through Northwest Branch Park into less affluent areas in order to keep it away from Catholic University of America. 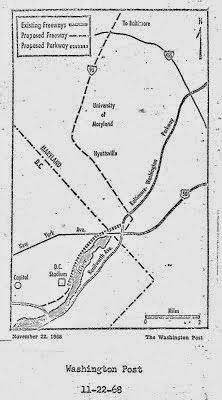 Posted by Douglas Andrew Willinger at 3:40 PM No comments:

Labels: Committee of 100, Getting Over on the Less Affluent Areas and Society at Large, Virginia Avenue Tunnel

Police officer threatening a citizen for video recording an arrest from a safe distance, yet as of late November, no evidence of disciplinary action sending the message that police misconduct is OK.

Taken on sidewalk next to the D.C. Public Library.

EDIT | 9/10/14: I filled out a PD-99 Citizen Complaint form with MPD Sunday night and submitted it to Internal Affairs and the District 1 Commander. I heard back from Commander Jeff Brown and Captain Brian Harris on Monday afternoon, and again from Capt. Harris Tuesday night. Capt. Harris told me the officers shown were clearly in the wrong, that he and another officer he showed it to said "What the hell!?" aloud while watching it. He told me that the officers in the video would be disciplined.

Prior to this incident I wasn't aware of MPD General Order 304.19 set forth in July, 2012 regarding "Video Recording, Photographing, and Audio Recording of Metropolitan Police Department Members by the Public." It's found here and addresses a number of the issues I brought up in the video: https://go.mpdconline.com/GO/GO_304_1...

I pulled out my phone and began recording when I came upon a man being physically restrained by 7 D.C. police officers outside the downtown branch of the D.C. Public Library September 7, 2014, at 6:24 p.m.

The video came out blurry, but 48 seconds in, Officer C.C. Reynolds (badge 3983) didn't like that I was recording the proceedings, and tried to intimidate me into leaving the scene.

I don't know what happened before this, whether the man was indeed fighting, or whether the large police response was warranted, but in light of the recent events in Ferguson, Mo., Staten Island, N.Y., and elsewhere, I thought it prudent to stay and observe the arrest. I know that I have a right to occupy a public place, and that recording the police isn't cause for suspicion or accusation of wrongdoing.

I don't appreciate the intimidation tactics Officer Reynolds used to try to bully me into leaving. I believe the D.C. Police Department should apologize, reprimand Officer Reynolds, and work to ensure that its officers understand the rights of the public.

At one point in the video I point out that the D.C. Police Department is considering the use of body cameras. More on that here: http://www.washingtonpost.com/local/c...

Posted by Douglas Andrew Willinger at 11:09 PM No comments: