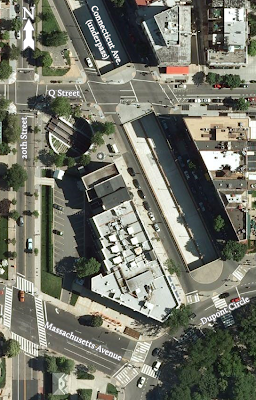 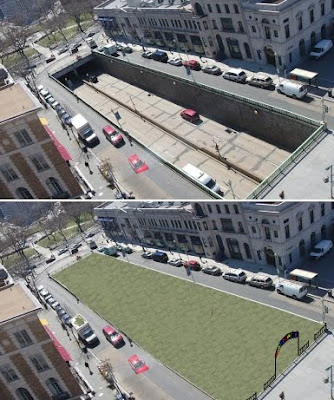 From Left For LeDroit:

Putting A Lid On It 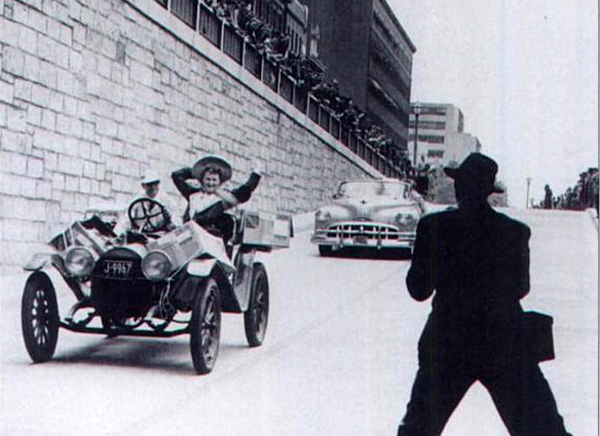 In 1950 the District opened a vehicular underpass allowing Connecticut Avenue to dive under Dupont Circle. The underpass, which still exists today, is flanked by two abandoned (and hidden) streetcar tunnels that sit behind each rusticated retaining wall. In March 2007, DDOT finished refurbishing the automobile underpass, but the city missed an excellent opportunity to restore the gashed avenue above.

Between Dupont Circle and Q Street, the underpass is “daylighted”— exposed to the sky— needlessly monopolizing space from the block’s active street scene. 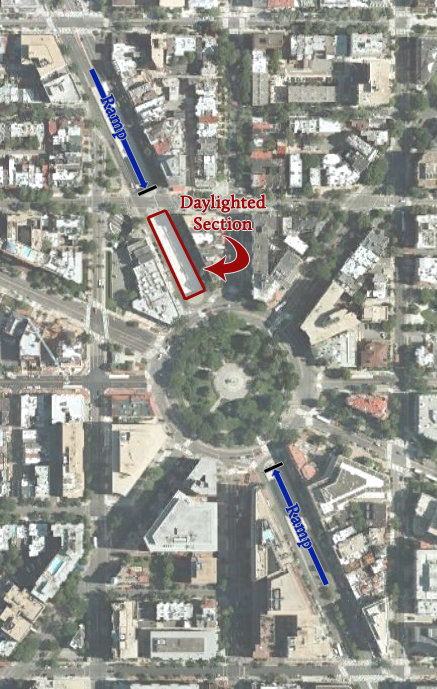 Our solution for street reclamation is simple: cap the underpass for that one block. 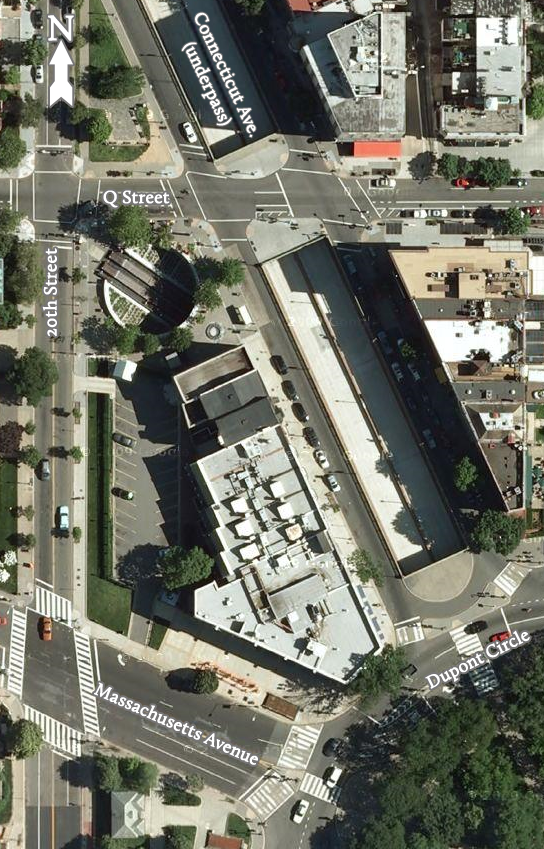 Connecticut Avenue, for that one block, would become much like P Street or Nineteenth Street (on the north side) as they approach the circle. Each provides a travel lane and a parking lane in each direction— far different from the cramped and highway-like atmosphere on Connecticut Avenue.

The businesses along the block would benefit from sidewalks that will double in width as well as from easier access from the roadway, parking spaces and sidewalk on the opposite side of the avenue. The increased sidewalk space will relieve the pedestrian congestion on the sidewalks (particularly on the east side) and provide space for outdoor seating and for stores’ promotional placards. Pairs of facing street benches perpendicular to the avenue will provide more seating for shop patrons and passersby.

Furthermore, the ample, seamless space would provide another truck-accessible venue for weekend farmers’ markets or art sales and other events that a stodgy National Park Service may not permit in the circle itself.

Plans are already in motion to build over I-395 and the National Capital Planning Commission dreams of covering the E Street Expressway in Foggy Bottom east of the Kennedy Center. Compared to those proposals, this one is simpler, easier, and cheaper and would benefit more residents.

Update: We considered the idea of a medial park, but worried that it would suffer from desolation due to its separation from the active sidewalks. Though certainly better than the status quo, we suspect fewer people would want to sit in what is essentially a grassy street median. That said, it would certainly be cheaper to build— and money is no small matter in this case!

The advantage of our proposal above is that it enhances existing spaces (the sidewalks) whose heavy use warrants improvement.

Posted by Douglas Andrew Willinger at 10:43 PM No comments: