The Fallacy of NOT Building the Diagonal South Leg Tunnel 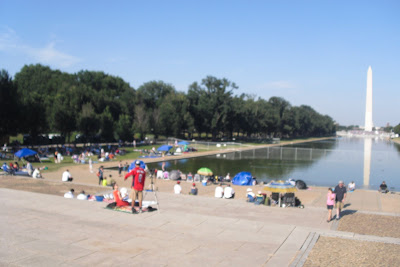 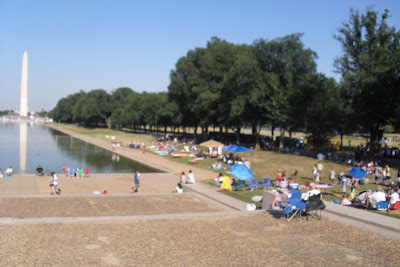 Pics of the Reflecting Pool, July 2010; note the spots of smaller trees along each side at about the location of this 'diagonal' route I-695 tunnel. 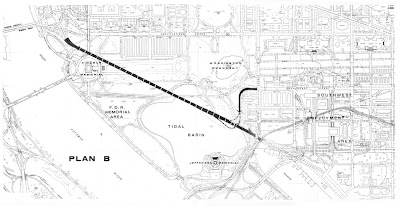 Adopted from:
http://wwwtripwithinthebeltway.blogspot.com/2007/03/i-695-south-leg_18.html
In 1966, a new design for Washington, D.C.'s South Leg segment of the Inner Loop Freeway appeared. It featured a single continuous, 5,600 foot long West Potomac Park tunnel, constructed by the cut and cover method, upon a diagonal routing fully east of Lincoln Memorial traffic circle and partially beneath the Reflecting Pool. Because of its continuous length, this was the one option featuring ceiling ducts for a ventilation system. Under this plan, the surface roads in West Potomac Park were to be removed.
This design, initially pursued as a full tunnel alternative to the previous design, was approved by the National Capital Planning Commission on September 15, 1966, and recommended to the D.C. Board of Commissioners for implementation. However, this diagonal route tunnel proposal came under criticism by the Fine Arts Commission at a meeting on September 20, 1967, for reason of its destruction of two spots of mature trees that flank the Reflecting Pool, which would require more than a generation for transplanted replacements to grow to the same size as the removed trees. Hence, the D.C. Department of Public Works would back away from this design at a closed door, Tuesday meeting of the National Capital Planning Commission, reported by a Jack Eisen article in The Washington Post on October 30, 1969. Accordingly, for reason of entirely avoiding the trees along the Reflecting Pool, the earlier plan, regained its earlier status as the largely officially preferred plan. Ironically, while this tunnel was not built, the trees it would have displaced and replaced along the north side of the Reflecting Pool were displaced and replaced for other reasons.
Posted by Douglas Andrew Willinger at 1:31 AM 6 comments: