on dealing with the Washington, D.C. region's worsening traffic problems

A June 21, 2011 presentation moderated by Bruce Depuyt, featuring David Alpert, creater of the blog Greater Greater Washington, Stewart Schwart of the Coalition for Smart Growth, and Richard Parsons of the Suburban Maryland Transportation Alliance; Depuyt askes what needs to be done to fix the Washington D.C. region's notoriously bad traffic problem, yet does so with a misleading spin, from the very start.

Rather, it should be described as those promoting a full mix of three main options:

Versus those promoting only 1) and 2) but not 3), disregarding that is precisely what’s been done for the past 30+ years where it naturally is going to matter the most with the greatest ripple effects.

Yes, “traditional” – in the context of Washington D.C. regional planning – means NOT building any new major vehicular roads, a tradition of the last 30 some years, and of greater densification within the urban core/near WMATA transit stations, a tradition of the last 14 or so years. “radically different” could mean either abandoning that, or it can mean retaining that along with starting a supplementary stage of additions to the major roads network, including improved interchanges/intersections and all new links, for transit and highways.

From the spin, one would image that the Washington, D.C. region, which has got to include Washington D.C. has been building new grade seperated highways (freeways) for decades.

Yet it is within the Beltway and Washington D.C. itself where the region has suffered with the 'de-mapping' of most of the planned freeway network.

The Washington, D.C. area transportation system can be thought of as a giant carriage, with two radically different types of wheels on its left and right sides: one has a complete outer tread but with a broken and largely missing center hub, with a huge gap in its radial spokes; the other has virtually no outer tread, but with numerous more and more evenly distributed radial spoke; sitting between are a body polite telling u to simply move laterally towards the side with the latter type of wheel-and imagine the increasingly likelihood of getting shafted.

That was the result of the great transportation planning controversy of the 1960s and 70s.

We were promised both wheel-sets- a WMATA rail transit network, and a freeway-highway network. Though it was not offered with a transit outer tread – a beltway rail, offering that only for the freeway network owing to the relative little demand – it offered both WMATA rail and freeway radial spokes, as seen by November 1962. 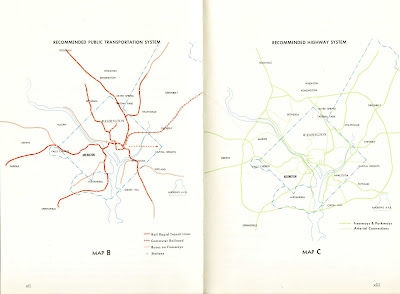 Anyone remotely familiar with the region knows this is largely the WMATA system, but behold, much of the freeway system is simply missing- a fact testified daily by the sights of the numerous freeway truncations within and near Washington. Consequently, as a result of the mis-planning of the mid 1960s and later, there are no continuous freeway routes, encouraging thus the traffic to entirely spill onto the surface streets and/or take continuous yet longer freeway routes, primarily upon the Capital Beltway which goes around Washington, D.C. barely piercing its southernmost disconnected tip in Alexandria, Virginia’s Jones Point Park. This wastes a significant amount of time, discourages commerce, and does so unnecessarily from standpoints of local neighborhood preservation and costs, owing to the existing right of ways – such as the conveniently located 250 foot wide PEPCO power line corridor for extending I-95 within the Beltway – as well as the use of cut and cover tunnels, not only such beneath existing surface streets, but also to bring it back together where now bisected by surface and elevated rail .

Yet Depuyt with a straight face asks "To what extent do you envision some type of pushback against a more roads is better approach to solving our regions transportation problem?"

Depuyt sounds utterly ignorant of the history of Washington, D.C. and inside the Beltway highway planning -- we all know that the Washington Post loves to continually lie about it again and again and again -- and that the spin is assigned.

The dynamics suggest something highly hierarchical, with key properties along key routes, such as this, and hardly loyal to the principle of truth.

More on this:
A debate on the region’s transportation priorities

Posted by Douglas Andrew Willinger at 11:41 PM No comments: