Extending the Legacy with the Grand Arc 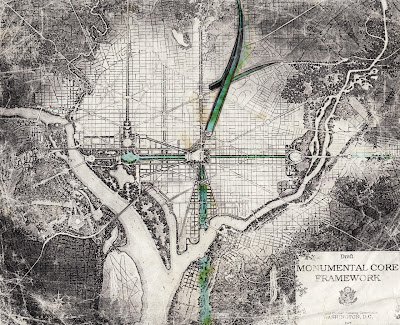 Here's an illustration from U.S. National Capital Planning Commission's 1997 publication "Extending the Legacy: Planning America's Capital for the 21st Century" that I modified with my concept for a northern mall via a reconstructed, under grounded, multi-model Metropolitan Branch RR corridor- the Grand Arc 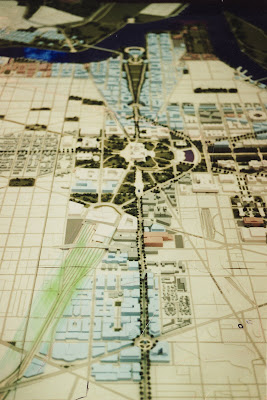 I was told that the Extending the Legacy program WAS going to do something with this Union Station RR corridor, to depress and cover/deck it, but that it was pulled by those with significant political pull behind the scenes.

Perhaps the power elite don't like the shape of a giant comet poised at the headpiece of their literal stick figure of the U.S. Capitol Building? 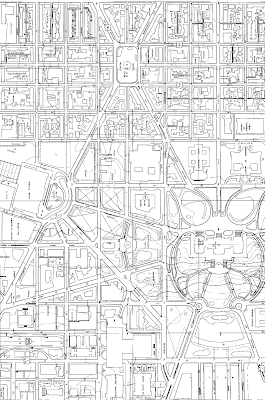 Posted by Douglas Andrew Willinger at 6:08 PM No comments: 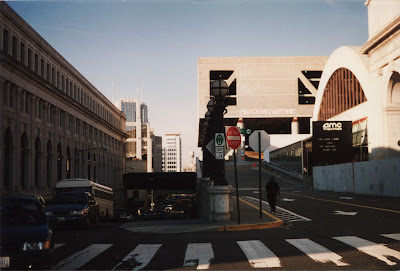 This side was cluttered by the unsightly and unsymmetrical parking garage. 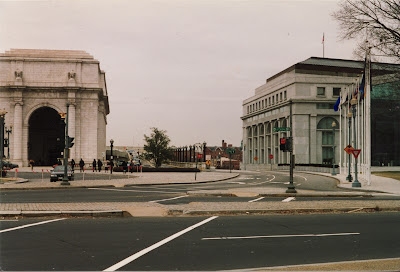 This second photo's area has since been cluttered by misplaced real estate development.
IMHO the parking garage and other such clutter ought to be demolished and replaced with something that for just a start is symmetrical, and more architecturally complimentary, and which preserves the vistas extending northerly from the axis of Union Station's flanking roadways. 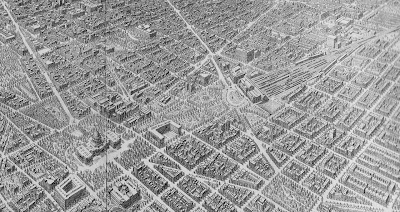 Alas, monumental symmetricy appears to be lacking in what's in store for Union Station's backside areas. 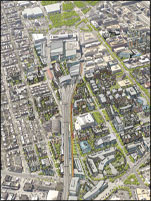 The above rendering of the "Burnham Project" reinforces my hunch that the authorities seek to obliterate this transportation corridor's monumental thrust.

Posted by Douglas Andrew Willinger at 5:55 PM No comments:

The Monumental and the Mundane 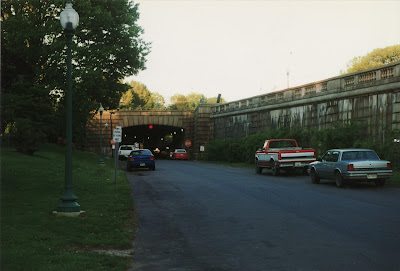 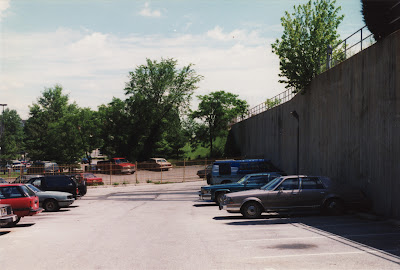 Labels: infrastructure for the family of man, Union Station

from Richard Layman's
Rebuilding Place in the Urban Space

12. Tunnelize the Metropolitan Branch railroad line. This is a stretch. It would cost billions and would involve creating tunnels for both the railroad and the subway. But it would allow for adding capacity to that line, which is quickly moving to capacity, and given that the subway line is bracketed by CSX railroad tracks, it can't expand except by having double stacked trains, which we can't do because of the way the tunnels and bridges exist.... (Note that a railroad, maybe CSX, maybe Norfolk Southern, is making their line from Chicago to Richmond capable of carry double stacked containers the whole route. This means adjusting tunnels and bridges...) 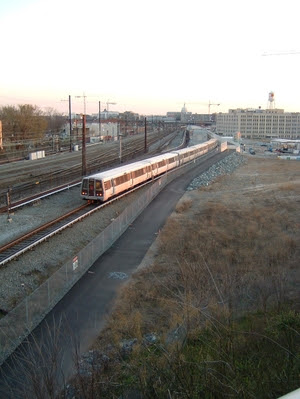 http://washcycle.typepad.com/home/images/metbranchold.JPG
Note that this isn't a priority for me, but I think it should be listed nonetheless. It should have been done in the late 1960s when the subway system was built. Now it's too expensive and it wouldn't really create much in the way of new developable land, which would have been able to help fund the change. Layman is quite correct in pointing out the extra land use efficiencies of the potential of tunnelization for increased capacity within a given corridor. 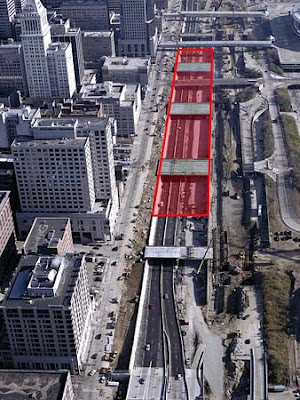 He over looks its potential though as a linear park that would re-knit D.C. NE, and which could be fronted in some areas with new development.

I wrote about my more multi-model proposal for tunnelizing this Washington D.C. transportation corridor in my September 8, 2007 Trip Within The Beltway article
"A Washington, D.C. 'Big Dig'"

- construct a WMATA Red Line/B&O Metropolitan Branch multi-model transportation tunnel lowering the existing railroads with additional capacity, with a new underground highway from New York Avenue northwards with a split at New Hampshire Avenue for a PEPCO continuation in Maryland to I-95, with the railway/highway tunnel continuing north, northwesterly to the Capital Beltway, with downtown Silver Spring and Takoma heavy rail in a new bored tunnel, and with the Red Line partially in cut and cover tunnel and partially along existing surface segments, notably the historic art deco George Avenue overpass.

This serves as the foundation of a new landscaped lid that would extend southwards towards and architecturally integrated with the back side of Union Station, and extending northerly through the Brookland/Catholic University of America and Takoma areas: the Grand Arc Mall Tunnel. 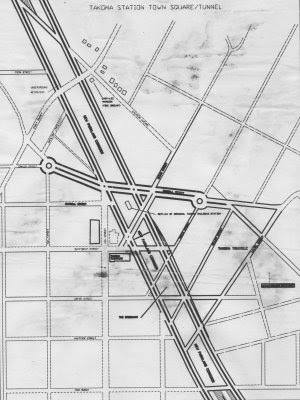 
Will Drivers Pay to Hurry Up to Wait?

Why more then ever, a project to give Washington, D.C. a comprehensive, multi-model subway system
Posted by Douglas Andrew Willinger at 2:36 AM No comments: