A SE Freeway Plan Benifiting The Greatest Segment of Society 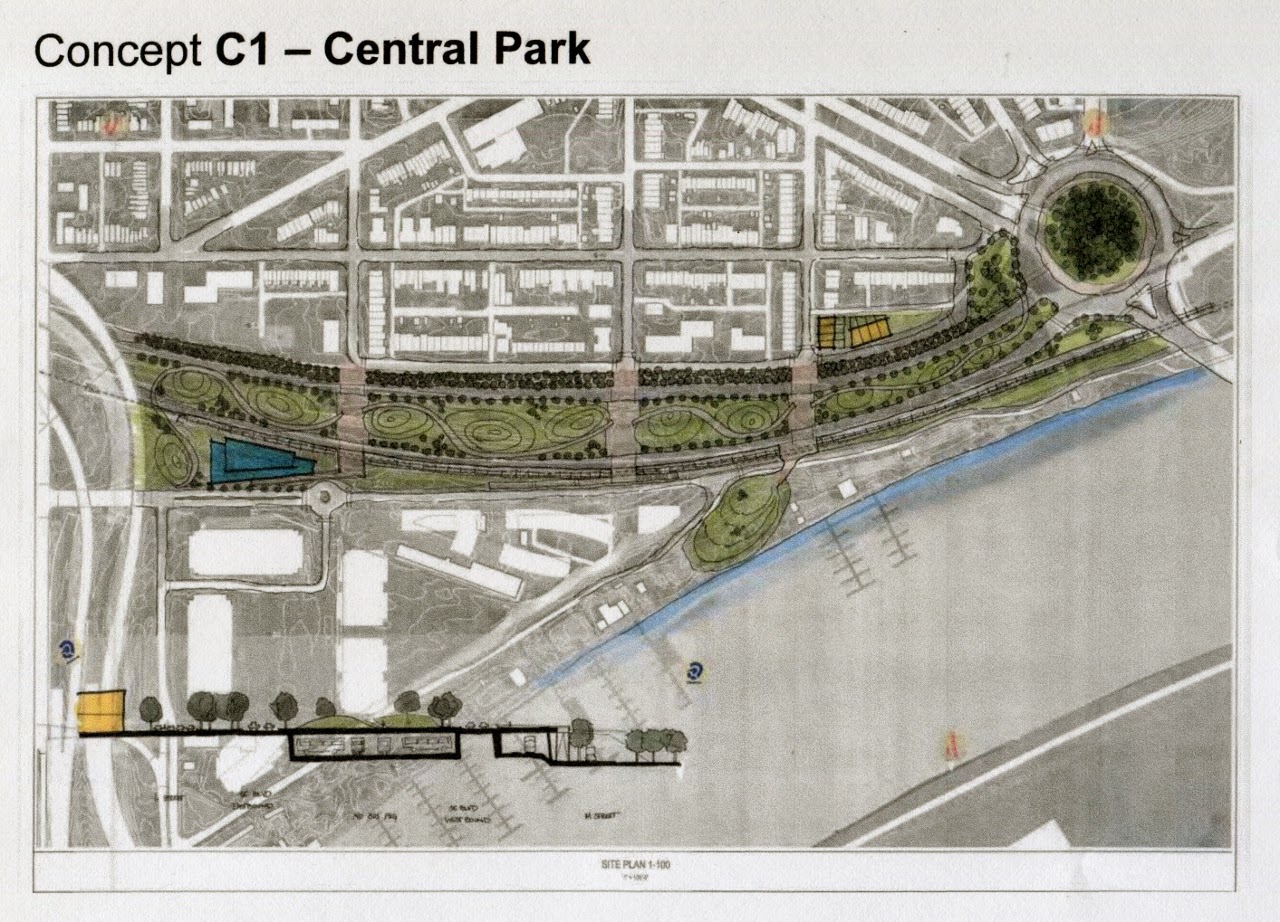 Shown as an underground bus depot, though clearly practical as underground box tunnel freeway
connecting into the existing set of box tunnels beneath Barney Circle

Freeway Cover should be modified to connect the north-south running streets to M Street
and extend Water Street with appropriate waterfront terracing,
reconnecting neighborhood to waterfront
NONE of the proposed options would do such

Relatively Low Cost Underground SE Freeway - build box tunnel atop existing eastern SE Freeway and the adjacent railway with terracing down to the waterfront- low cost due to that the most expensive portion of an underground freeway is creating the new excavation, and this segment would not require any new excavation.   Build new linear park atop, flanked by 2+ lane surface roadways tied into the existing street grid, with some new development to the sides.

Extend to new interchanges at East Capitol Street and Benning Road - would require minimal excavation, being cut into side of hill along the western side of the Anacostia River, with northern portion a trench through parking lots, connecting to the New York Avenue Corridor-with access to the BW Parkway and design flexibility to the northwest.

Build such with surface roadways as "complete streets" tied into the street grid; line portions with new development alongside if not atop in areas.

They could keep the freeway, extend it along the west bank of the Anacostia to Route 50/BW Parkway with interchanges at East Capitol St and Benning Rd and cover the whole thing with a platform containing a "complete street"-type boulevard lined with retail, entertainment, condos, and apartments that intersects with existing neighborhood streets .

This would make lot of sense considering DC's desire to get the 2024 Olympics. The housing could be built as housing for the teams and converted to market and affordable housing later. And since it would be a once in a lifetime project - located away from the historic core where people are obsessed with "views" - perhaps they could relax the height limits, allowing for some really creative and interesting architecture.

But that would require imagination and spunk. Something the District's "leaders" are severely lacking.

Provides underground freeway at considerably less cost then the much needed undergrounding of the existing Anacostia Freeway to the east of the Anacostia River that now cuts off those less affluent areas from the Anacostia Waterfront.

Provides alternative route- crucial for diverting traffic from the existing Anacostia Freeway, making that latter freeways undergrounding - which requires a new excavation -- more practical.  That would increase the likelihood of those less affluent areas to the east of the Anacostia Freeway to have that freeway undergrounded, hence increasing their access to the Anacostia Waterfront.

Opposition to the freeway to the west of the Anacostia River - whether the established portion or the extension -- would be a classic text book example of a wealthier area getting over on a less affluent area, and society at large.  Such is being pushed by officials as ANC 6B09 Commissioners Brian Flahaven and Kirsten Oldenburg.

In November 2013, the District Department of Transportation shared five design concepts for replacing the end of the Southeast Freeway with a boulevard and constructing a full traffic circle at Barney Circle SE. As I detailed at the time, all five DDOT concepts essentially replaced the freeway with….a freeway completely separated from the neighborhood grid. ANC 6B unanimously opposed DDOT’s concepts and urged the agency to reconsider their plans. 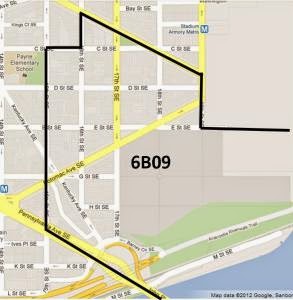 Note that the freeway extension would run along the outer edge of ANC6B and NOT displace any homes there.  Built properly with the box tunnel cover with waterfront terrace, it would actually increase ANC6B's waterfront access.

A freeway extension is alas not being formally considered, only the long established portion to the west of Barney Circle-Pennsylvania Avenue and east of the 11th Street Bridge is being considered.

Recent planning was pushing to have this SE freeway segment decommissioned and replaced at best with a surface street, though DCDOT has apparently had second thoughts and is now moving for its restoration for re-opening.

Bowing to political pressure from both DC and Maryland commuters, DDOT is planning to temporarily re-open the freeway between 11th Street and Barney Circle by the end of the year. Construction crews are already putting the old road back in place using funding from the 11th Street Bridge Project.

Let DC reopen this road. It would relieved the operational problems on the other side of the river. Traffic bound for eastbound Pa. Ave enters DC 295 from the left side of the freeway trying to exit to Pa. Ave on the right side of the road. This is dangerous.

This is why I assume the SE freeway spur is being opened.

As for thinking that opening the road will increase traffic on 19th and 17th Streets, drivers were using the narrow ramp by the cemetery illegally. If it was blockaded, the traffic on those two streets would not increase.

Let DC reopen the road to relived the dangerous situation on the other side of the river before some gets injured or killed.

People from the Hillcrest neighborhood, on the eastern, less affluent side of the Anacostia, understandably see this as a positive development.   In response to a letter from Boyle Stuckey, 2d Vice President of the Hillcrest Community Civic Association (HCCA):


We at the District Department of Transportation (DDOT) have received your support for reopening the connection between the Southeast/Southwest Freeway (I-695) between 11th Street SE and Barney Circle.

We appreciate your support and will take your concerns about closing the left-turn lane from Pennsylvania Avenue SE to northbound DC 295 into consideration. For further questions, please contact DDOT at 202-673-6813.

DCDOT is doing the right thing- as a foundation and start for a significant change for the better.

In the day and a half since I published this piece, not one but two articles have appeared on this freeway segment in David Alpert's Greater, Greater Washington:


Very interesting comments section in both.  Likewise with the following 2010 and 2013 GGW articles on the adjacent area to the south:


Last spring, I was in a studio at school that looked at the development potential of removing or capping parts of the Southeast/Southwest Freeway. I did the urban design plan, and in the area you're talking about, we extended the existing street grid to the river and got a pretty substantial amount of housing and a lovely waterfront park to boot.

My beef with Southeast Boulevard is that they didn't really consider how the street would fit into a larger scheme for that area. It could be the spine of a new waterfront neighborhood, but instead it'll just be a street as divorced from its context as the freeway is.

Dan Reed- I would love to see that studio's work. 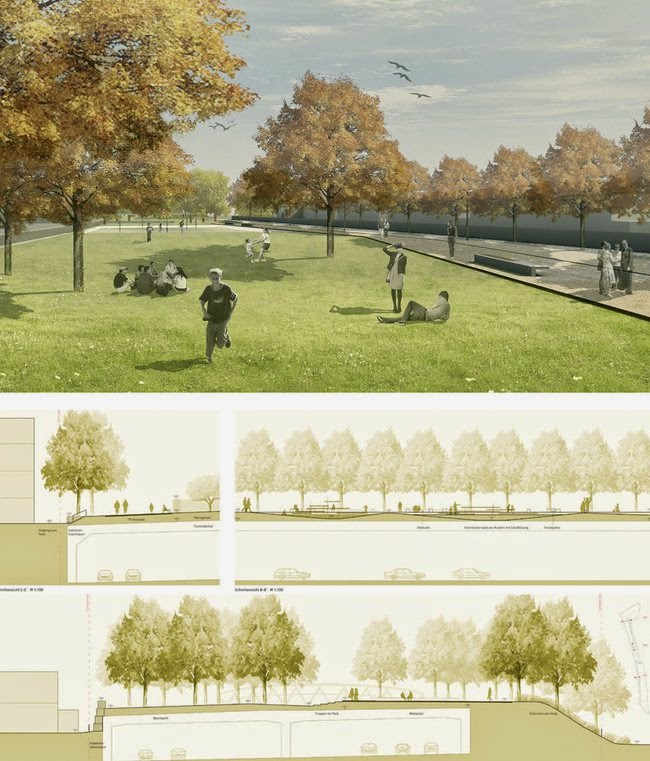 http://www.treehugger.com/urban-design/german-autobahn-covered-giant-public-park.html
Posted by Douglas Andrew Willinger at 12:48 AM