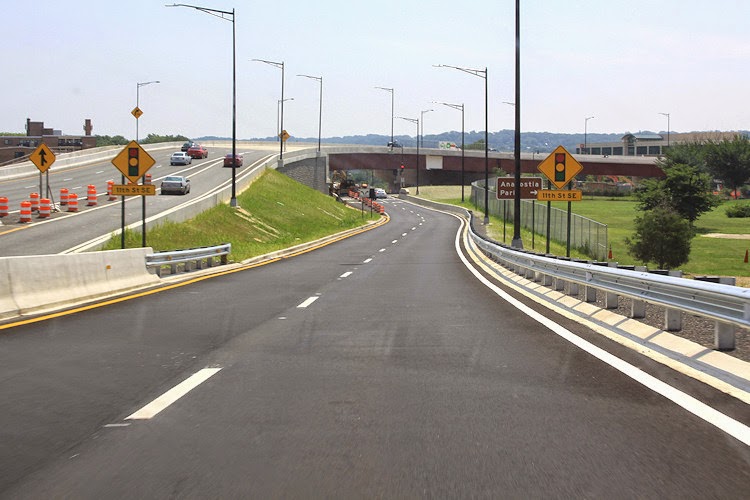 The SE Boulevard is essentially a narrowing of the existing-former SE Freeway segment between the 11th Street Bridges and Barney Circle/Pennsylvania Avenue.


It is alas NOT connected to the remaining SE Freeway by a grade separated interchange as God intends, but rather a traffic light intersection, as its previous direct correction was eliminated with the option chosen for recent project to replace the 11th Street Bridges. 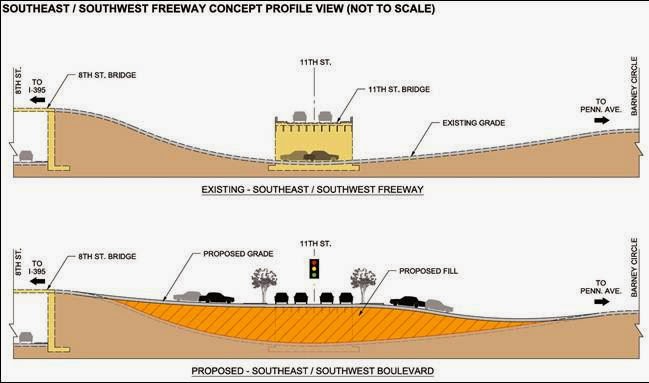 
Of these, Options A and C show a decked over space to be used for underground bus parking.  Such could theoretically be used for an underground freeway that would essentially tie into to the existing pair of underpasses beneath Barney Circle.


Option B meanwhile shows such space wasted via being simply filled in with dirt.  however any of these options could ultimately accommodate a future underground freeway, though Option B would require the greatest construction disruption by requiring excavating the streets rather than simply reuse the underground parking areas that would be provided by Options A and C.

NONE of these options show a true waterfront connection/continuation of the street grid.   All simply provide pedestrian-bicycle only continuations of the three north south streets, 13th , 14th and 15th Streets SE.  None provide a proper raising of the M Street right of way to meet the east-west boulevard, and with only a single pedestrian-bicycle path crossing the otherwise uncovered railway.

Such a proper build-out to the waterfront is thwarted by the current planning for the 1333 M Street real estate development project.

That project could and should be redesigned to accommodate not only at connecting a raised extension of eastern M Street into the new SE Boulevard, but also perhaps an extension of Virginia Avenue SE to a redesigned Water Street.