Does the sudden shift in 'appointment' of national DC overlord suggest a tail that wags the dog of a top down dictate against those questioning the truncation of the Washington, D.C. freeways 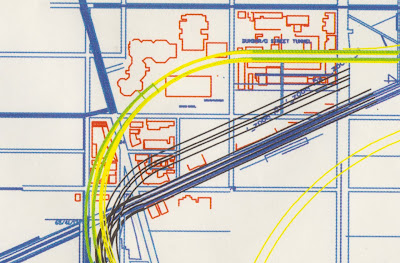 Yesterday I open up the breakfast links of the blog Greater, Greater, Washington to see that D.C. may get a new overseer, Brian Bilbray (R-CA), that questions the truncation of the freeways:

This is my chance to say something about this. I was absolutely appalled when I came here in the 1990's and saw what appeared to be the gross abuses of local control by the local community. Freeways were not allowed to go through because of Ward politics. Maybe it is because I am a Californian that I can't comprehend the ability of politics to stop a freeway dead in its tracks, not just once but twice. Though, I have seen it happen.

Yet upon clicking on the link to the original Washington City Paper article that GGW points to, which has this above quote, it already has this update:

UPDATE, 1:30 p.m. - Whoops: Mike DeBonis is reporting that [Congressman] Bilbray's been removed from the Oversight Committee, which means we don't know who'll be in charge of the District's fate come January.

Reportedly this is because Bilbray has been given another assignment.
Perhaps this is just coincidential, but will any of the other possible candidates dare speak out against the status quo of why I-395 dead ends at New York Avenue, mere blocks from Washington, D.C.'s two largest transportation - industrial corridors -- despite local support for the tunnel concept extending at least to the vicinity of Florida Avenue - with the authorities considering a sole tunnel alignment that fails FHWA line of sight standards? 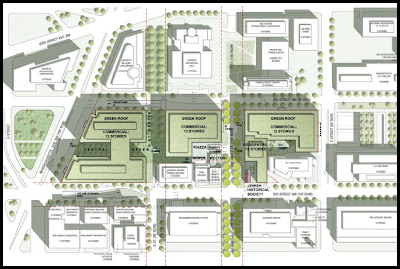 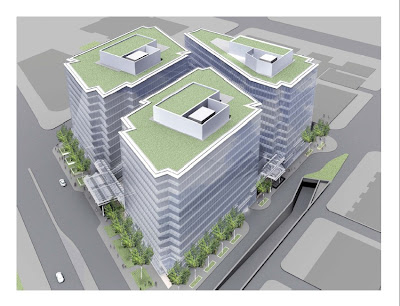 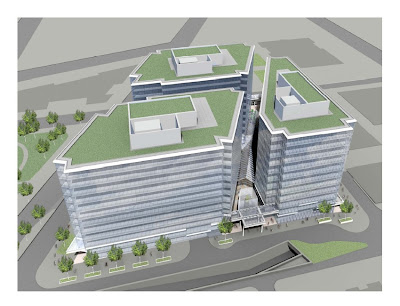 Project shall erect new buildings atop a cap atop the I-395 Center Leg Freeway southwards from Massachusetts Avenue NW, along with reconfiguring the freeway's access ramps.

This includes removing the southbound off-ramp (which is viewed as unneccessary since the freeway only starts just to the north at New York Avenue- owing to the wholesale freeway cancellations of the 1970s and early 1980s), replacing a Roman Catholic Church rectory, and again moving the Adas Israel Synagogue (now the Lillian and Albert Small Jewish Museum) moved to its present site about 1969 to accomdate WMATA subway related development.
Project shall reconnect G and F Streets across-atop the freeway, with G Street for pedestrians and bicylists, and F Street including vehicular traffic (with a full G Street connection impractical owing to the design of the northbound offramp).
Posted by Douglas Andrew Willinger at 11:42 PM 1 comment: 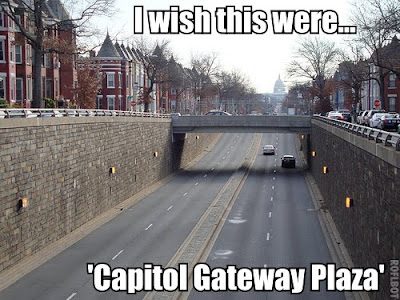 Malcom Kenton provides this photo at Greater, Greater, Washington, with this caption:
"As I recently suggested, imagine this mini-highway decked over to become a tree-lined plaza framing the view of the Capitol dome"

Indeed at that earlier article, he writes:

DDOT should begin by studying the cost, feasibility and impacts of decking over the dug-in portion of North Capitol between Rhode Island Avenue and T Street and creating an attractive public square — replacing a noisy eyesore with a neighborhood amenity. Should a full decking over prove prohibitively expensive, other more affordable aesthetic enhancements, such as covering the fences with native flowering vines, ought to be considered.

Converting highway corridors into public parks is becoming a trend amongst American cities. Boston exemplifies how greatly a city can be enhanced when an ugly highway corridor is put underground and converted into a well-designed park. Dallas also seeks to convert its Woodall Rodgers Freeway into greenspace.

Improvements to the North Capitol Street and New York Avenue intersection should also seek to address traffic bottlenecks. The ramp from southbound North Capitol onto New York Avenue, which is now used by two high-ridership Metrobus routes and several delivery trucks, is a notorious one. A redesign of this intersection that improves traffic flow, while also leaving space for a greenery or a public monument or fountain would greatly benefit this developing part of
the city.

Instead of a noisy, unattractive mini-freeway that benefits those driving through Bloomingdale, Eckington, Truxton Circle, NoMa at the expense of those who live along it, future residents and business owners and patrons could benefit from visual enhancements that complement the surrounding Victorian architecture and the view of the Capitol, while still allow traffic to flow smoothly. Turning this part of the North Capitol Street corridor into a desirable destination would generate benefits that could exceed the significant costs of remaking parts of the infrastructure.

Capping the depressed segments of North Capitol Street (the photo above is of the northern segment that crosses beneath Rhode Island Avenue NE) would convert them into cut and cover tunnels, expanding upon the efficency of the below ground cut with a roof to further the social benefits. As these are roads allowing and reconciling greater human activity within a given footprint, one could imagine environmentalist organizations favoring their construction- provided a philosophy of human growth.

Around 2005 District authorities conducted a study of the Truxton Circle area of North Capitol Street between the two depressed segments of North Capitol Street- that included an option for a cut and cover segment in this area effectively connecting the two existing depressed segments. IIRC, it did not surface or provide intermediate connections to the surface at Florida Avenue, with sparce consideration of such.

The two depressed segments appear to be a part of an upgraded North Capitol Street, that was planned to connect with the planned North Central and Northeast Freeways, as seen here (image), and here (image).
Posted by Douglas Andrew Willinger at 12:57 AM No comments: