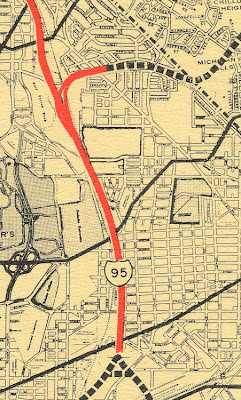 1966 B&O Route Low Level I-70S-I-95 "Y" route
It was under capacity: committing the cardinal sin regarding the number of lanes, with a lesser number fed by a greater number.

A 6 lane upper left I-70S, and an 8 lane upper right I-95, should converge into 14 lanes, not the mere 12 of the 1966 design (with a questionable 1 lane drop for I-95 at its ramp connections towards North Capitol Street), that would quickly funnel into 10. 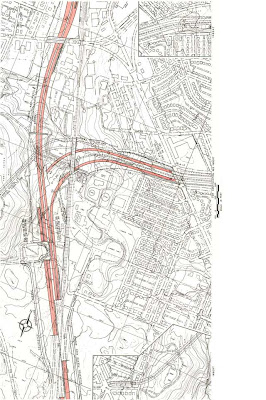 I-70S-I-95 convergence
1966 B&O Route Low Level
This set of design defects was shared by the 1964 plan, which also fed more lanes into fewer. The 1964 plan had 6 lanes apiece from the 8 lane main roadways of I-70S and I-95 converge into 12 lanes quickly narrowing to only 10 (plus the 2 lane reversible median roadway that had not been planned with connections to the I-95 Northeast Freeway), with both I-95 and I-70S having a 1 lane drop and pickup, the former for the North Capital connections, the latter with “round the corner” connections between both highways to exchange their southbound to northbound traffic, e.g. southbound I-95 to northbound I-70S and southbound I-70S to northbound I-95: a connection that.

To accommodate this number of lanes, the existing 6-8 lane Center Leg would require the addition of an 8 lane East Leg, plus parallel cut and cover tunnels beneath 2nd and 3rd Streets NW/SW along the Center Leg, connected to a new preferably underground SW/SE Freeway with additional capacity for the SW Freeway, and to a new South Capitol Street corridor tunnel.

I-70S-I-95 convergence
1964 Route #11 (Railroad East-Sligo)
Combined with the respective inside the Beltway I-70S and I-95 interchanges with Maryland Route 410 would provide a useful bypass of normally 4 lane 410’s 2 lane bottleneck through Takoma Park. However the latter plans delete this feature.

Such a cut and cover tunnel would accomplish and reconcile greater human activity within the existing footprint.

It would cost very little money compared to the various war budgets, and would serve the idea of greater evacuation route capacity that some within the government gave lip service to after 911.
Posted by Douglas Andrew Willinger at 1:44 AM