Under Selling The B&O Metropolitan Branch

UnderSelling by not mentioning the potential linear park, let alone render that corridor to be more multi-model with an underground North Central Freeway

12. If you really want to spend money on infrastructure....

a. put the CSX Metropolitan Branch railroad underground.
b. There would have to be at least two levels of tunnel, for both the railroad -- three tracks -- and for the subway.
c. Make the subway tunnel two levels, or capable of carrying doublestack trains to double the capacity of the red line subway.

This one is so expensive that I won't put it in the priority list, but it could be done and would impact the region's and especially the city's competitive advantage for generations. See the blog entry, "Rethinking the Metropolitan branch railroad and subway tracks in northeast DC" for much more about this.

I have cut and pasted that below:

Rethinking the Metropolitan branch railroad and subway tracks in northeast DC 1. I find it interesting that last week's Current Newspapers announced in an editorial that Mayor Fenty has ordered a cessation of planning to remove the Whitehurst Freeway, something opposed by some but not all of the citizens groups in the Greater Georgetown neighborhood.

2. This is counter to the trend across the country, such as in San Francisco and Milwaukee, not to mention cities like Seoul, where this has already been done. Seattle probably will remove the Alaskan Way Viaduct as well (and there is no question that the Viaduct there cuts off the city from the water). 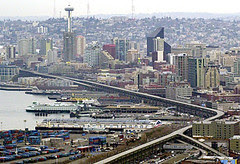 See "15 SECONDS THAT CHANGED SAN FRANCISCO / The sweeping makeover that transformed the city began 15 years ago today with the Loma Prieta earthquake," by John King from the San Francisco Chronicle about removal of the Embarcadero Freeway and the subsequent positive impact.

Also see "Freeway Deconstruction and Urban Regeneration in the United States," a paper from the University of California Transportation Institute and the webpage "Removing Freeways, Restoring Cities."

3. At the Congress for the New Urbanism meeting in Philadelphia there was a session on removing freeways along riverfronts. Michael Lewyn has some notes about the session in his blog. From the entry:

Jeff Tumlin asserted that freeways export real estate value from cities to suburbs; their absence maximizes cities' property value. He used Vancouver as an example of life without freeways: while downtown vehicle trips increased in every other Canadian city since 1995, such trips decreased in Vancouver- even while total trips (including walking/transit/bike trips) increased by 22%!

4. Plus, the City is removing part of the Frederick Douglass Bridge on South Capitol Street, putting more of the roadway at grade, and restoring the street grid in that area. See "Dead End at the Anacostia," subtitled "Two-Month Project Will Complicate Life for 77,000 Douglass Bridge Commuters" from the Washington Post, and ignore the focus on the very short term inconvenience to commuters. Instead focus on how the area will be improved by the reduction of the amount of aerial freeway span and the restoration of the grid.

The bridge repairs are being done to extend the life of the span until a new bridge is built. The $27 million project also will allow the new bridge to be built and connected to the street grid without major interruptions, officials said.

About 400 feet of bridge will be eliminated on the northern side of the crossing and 200 feet will be lowered about 10 feet so the span touches down at Potomac Avenue. As part of the project, the stretch of South Capitol Street just north of the bridge will become a tree-lined boulevard. 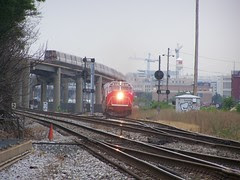 5. In the context of the current underway Brookland Small Area Plan, some of the residents have come up with an alternative suggesting that the railroad and subway tracks and subway station be "depressed" or decked, and the street grid be restored in the area between the two railroad bridge overpasses at Monroe and Michigan Avenues.

(In a conversation last night with a colleague he mentioned that it is not possible from an engineering to depress the railroad tracks for that depth for such a short distance. Railroad locomotive engines like even grades.) 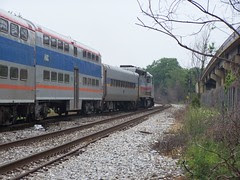 But after reading the piece about the re-configuring of the South Capitol Street bridge, to remove one span and put the street back in and on the grid, I have been thinking that it doesn't reach far enough. The Brookland "alternative proposal" doesn't suggest extending this idea and removing the bridges. 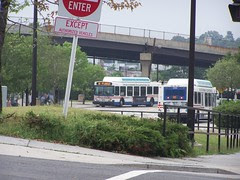 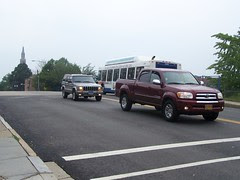 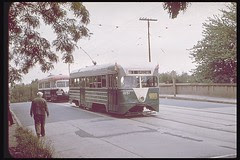 6. Extending this idea further, like the Reno Retrac project or the creation of the Alameda Transportation Corridor to connect the Ports of Long Beach and Los Angeles, how about putting the railroad tracks and subway tracks and subway stations below grade, from the Rhode Island Metro Station to perhaps as far as the Silver Spring Metro Station? Definitely to Takoma. 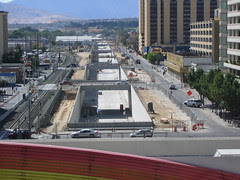 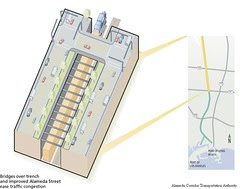 Both the Reno and Alameda Corridor projects created ditches. (See "The Train Line" for more about the LA project, and the City of Reno website on the Retrac project, including a section on the history of the project.) Instead, I suggest creating the ditch and covering it over, and restoring the street grid.

At Rhode Island Station, the subway tracks are high high above the street, but starting somewhat south, around the big Post Office Complex off Brentwood Road, the tracks could begin to go underground, instead of climbing up very very high. (The tracks start rising just south of the equivalent of T Street NE, around the WMATA maintenance facility.) 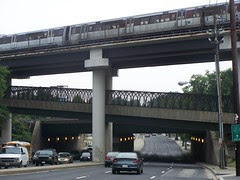 Corner of T and 5th Streets NE, adjacent to Sanitary Grocery, near the beginning of the rise of the subway track bridge

Around Franklin Street NE, the tracks go back to grade and a little further they even go underground a bit, where one of the railroad tracks cuts over to the east, and from that point going north for a ways, the railroad tracks bracket the red line subway tracks. 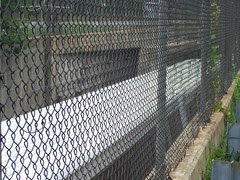 At the very least, it could be done in Brookland, say from Franklin Street up to Ft. Totten. By Franklin the tracks come down to grade or below anyway, from very high up at Rhode Island Station. 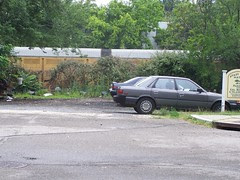 7. Another example would be the proposal for a Tysons Corner tunnel, which proposed a two level tunnel, using Spanish technology. 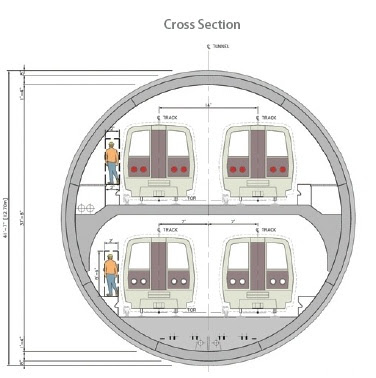 This idea could be further extended, and a two tunnel system could be created to separate the railroad from the subway.

See this blog's articles on the Grand Arc Mall Tunnel

Posted by Douglas Andrew Willinger at 2:45 AM

I think burying the Metropolitan Branch is a fantastic idea, and making it multi-modal would be great. But I have my typica question: where would the freeway end? I don't see it getting to the Beltway through Silver Spring, considering all the high density development along the tracks. I can't imagine they'd approve the Fort Totten Park alignment because it would still tear out a good bit of Chillum before it hits the Beltway. I certainly hope you aren't recommending another dead end freeway!

The plan would have I-95 split from the rr as a cut and cover tunnel beneath the field of the Masonic Eastern Star Home alongside NH Avenue, displace about 27 brick houses just inside DC and then 13 strip retail properties (with a monumental traffic circle at the DC-MD line, and then some cut and cover in MD with new development atop); there is no reason to use the Fort Totten (Fort Drive) Park route with the existence of the NHA-PEPCO route.

It could and should include the Silver Spring segment, either by ripping out some of the misplaced development on the rr's eastern side, or even a segment as drilled tunnel.

It would not displace the historic Cady Lee Mansion in TP, nor the houses facing the rr along Takoma Avenue, though it would take some of the misplaced Montgomery Gardens apartment complex.

Grade requirements will require placing the heavy rr in a drilled tunnel to northwest of 16th Street, but the WMATA could stay upon the existing Georgia Avenue overpass, which could have a surface street placed on it where the heavy rr is to better connect the area locally.

Some of Cedar Crossing might have to go, along with the entire Elevation 314 building.

However a replica of the historic TP rr station could and should reappear in a new Takoma Station Town Square.

The above url may not be readable; it is the illustration in this blog's post of July 2007:

Also see the 2 redundant tags about the B&O rr corridor.

the PEPCO route seems to be logical, reconnecting at College Park's interchange, I presume. I also imagine it would be two lanes in each direction, and above the railroad ROWs?

I'm a huge fan of burying the Metropolitan Branch, but I have never seen any sort of an estimate for how much it would cost to do so, and what kind of service interruptions the red line, MARC, and CSX would face during reconstruction.

The rail lines would first be replaced to avoid service interruptions, before the removal of the existing rail lines and the construction of the underground highway.

Why not place the highway underneath the rail tracks in a bored tunnel?

Or why not elevate the highway over the rail tracks without going thorugh people's homes?

I- Because that simply leaves the existing surface RR as a surface barrier and would deny that southbound I-95 view just south of Franklin Street. Bored tunnels work best with relocating the RR underground in the vicinity of Silver Spring and Takoma DC.

2- The elevated idea was rejected owing to noise, especially I would imaginge along Catholic University of America. My idea places the southbound lanes on the CUA side of the RR but as a cut and cover tunnel.

I would put the highway underground hugging the railroad tracks. The northbounds lanes would be on the east side of the tracks and the southbound lanes on the west side. I think cut and covering them could work, but tunnel boring could be a possibility.

If I-95 was tunneled all the way from new hampshire avenue to the proposed New york av. tunnel, then that would be one long tunnel from i-395's northern end to the PEPCO right of way. I would imagine that if someone crashed in the middle of the tunnel, it could get messy.

A cut and cover tunnel would be wide with full shoulders on both sides.