An Eisenhower favorite hang out, immediately within the I-495 Capital Beltway 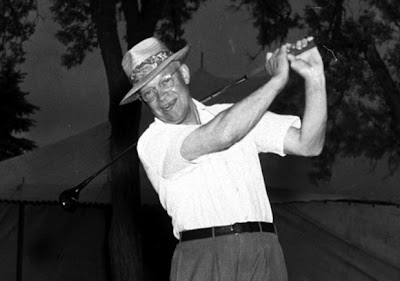 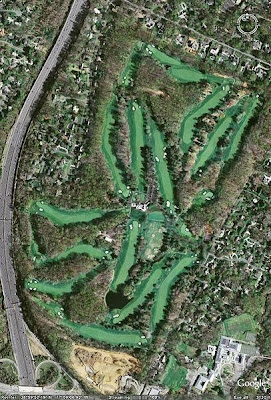 Recently a controversy emerged amongst historical researchers of Washington, D.C.’s truncated freeway system. It is centered upon claims that Dwight Eisenhower opposed urban freeways; these are based upon a story of his encountering freeway constructing in either in the NW area of Washington D.C. (which did not exist, e.g. the West Leg by the Kennedy Center started construction in 1961 or later) or just to the north of the construction of the circumferential Capital Beltway (which was under construction, though not an urban freeway). See the conversation thread here.

Perhaps seeing a portion of the Capital Beltway under construction through the Bethesda area inspired Eisenhower to think about these road’s right of way requirements- a thought making me ask if he ever questioned the use of eminent domain particularly as being used at the time of his Presidency in SW Washington, D.C. which leveled far more buildings then did the right of way for the SW Freeway which started construction by 1959. 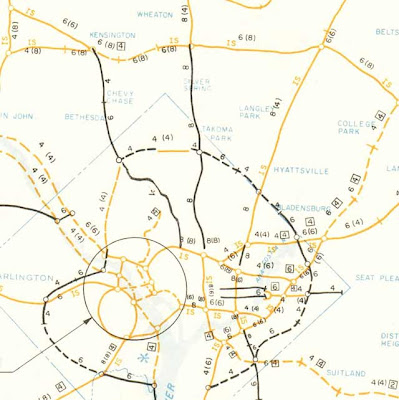 The Eisenhower library papers cited indicate that he had misgivings about urban freeway planning, specifically that through the “congested parts of the city”, calling for a subsequent study: a fact pattern of the extensive freeway system of the 1959 ‘Mass Transportation Plan’ displacing the dwellings of some 33,000 people that fits with the subsequent U.S. Presidential Administration of John F. Kennedy’s November 1, 1962 report for a smaller though still continuous freeway system with I-66 and I-70S into, and I-95 through the District with far less negative local impacts.

However, what primary resources indicate that Eisenhower opposed urban freeways unequivocally? Deleting urban segments from the early stages of the construction of the national interstate highway system does not necessarily translate to never having urban segments, particularly as definitions of terms as ‘urban’ or ‘congested’ and conceptualizations of feasibility may vary, as can those of routing and design for reducing impacts?

Would Eisenhower agree, in the case of the Washington, D.C. area, of having I-95, I-66 and I-270 never extend within the Capital Beltway, nor favor today’s status quo of the past few decades of I-95, I-66 and the SE Freeway’s truncations?

The following suggests not.

The big question is who ‘in the White House’ is responsible for this pressure.

One member of the Executive Committee of the Northwest Committee for the transportation Planning reports that he heard the President himself wants the Wisconsin Avenue corridor because he was irritated by the traffic congestion in getting to Burning Tree Country Club.

All White House contacts should be pursued in an effort to pin down the source of pressure on Welling, Tallamy and others to push through the Wisconsin Avenue corridor routing.

A google search of ‘Burning Tree Country Club’ led me to this in Maryland, just outside NW Washington, D.C., and immediately inside the Capital Beltway segment between the western I-270 spur and the Potomac River. 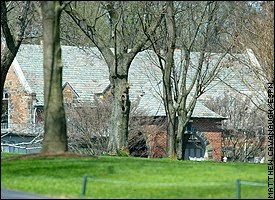 It is something that comes up frequently in searches about Eisenhower, as he evidently spent a great deal of time there, as an avid golf enthusiast said to have played some 800 games throughout his 8 years as U.S. President, alongside many powerful people. Just 'google' the terms 'Dwight D. Eisenhower' with 'Burning Tree Country Club'. 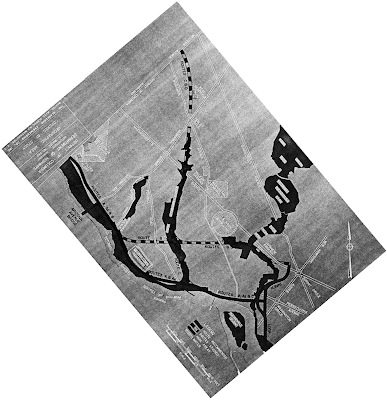 Constructing the Wisconsin Avenue corridor segment of the NW Freeway, as planned in 1957 southwards from the Pooks Hill interchange of the eastern spur of today’s I-270 and the Capital Beltway – miles to just south of a set of cut and cover tunnel underpasses beneath Tenley Circle, would have displaced 74 houses within D.C., and an indeterminate number in Bethesda, Maryland, largely within the footprint of the WMATA induced re-development that leveled much of that downtown.

Responding to barriers further south of denser, older Georgetown, and the political ban upon routing via the Glover Archbold Park (with only a brief cir 1957 consideration of a ‘Cathedral Heights Tunnel’- details unknown to me other then it running somewhere near the National Cathedral), official planning by 1958-59 went with planning the NW Freeway’s southern segment as the ‘Cross Park Freeway’. This would swing due east from the Wisconsin Avenue corridor just before Fannie Mae, skirting the northern edge of the Sidwell Friends School-Cleveland Park area, crossing below Connecticut Avenue and across Rock Creek Park to the Mt Pleasant area along Fort Adams Road and Irving Place before turning south some 500 west parallel to 14th Street, meeting the east-west I-66 North Leg of the Inner Loop between T and U Streets. 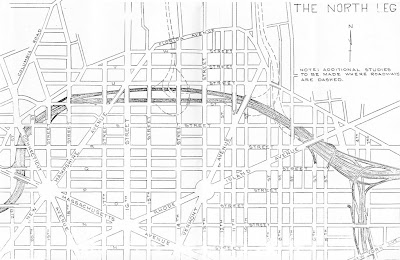 Almost all of this plan’s building displacement would be to Rock Creek Park’s east, in Mt Pleasant. Yet all of the 1959 revisions re-specifying certain segments as tunnels would be to the west, with the depressed Fannie Mae-Sidwell Friends and Cleveland Park-Connecticut Avenue segments respectively as drilled and cut and cover tunnels, though to east, only considering the options of sloped embankments versus retaining walls, despite the denser development resulting in greater displacement and greater local separation by the addition of the uncovered freeway. 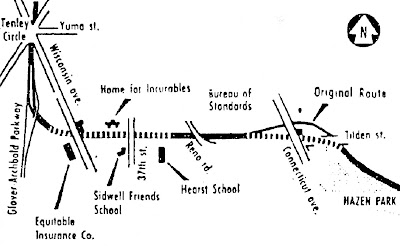 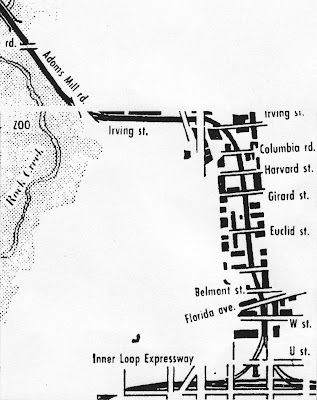 The opposition from to the west was instrumental in stopping the Cross Park Freeway planning (and indeed any freeway within NW D.C. west of 16th Street NW: the eastern edge of Rock Creek Park), namely that of Peter S. Craig, Cleveland Park resident, and railroad industry with the Washington, D.C. law firm Covington & Burling (co-founded in 1919 by railroad industry attorney Edward Burling), along with the ‘Committee of 100 on the Federal City’ (founded in 1924 upon the popular excitement about constructing the McMillian Plan’s West Mall-Lincoln Memorial, by Burling’s brother in law, Frederic Adrian Delano who sat on the original US Federal Reserve in 1914, and was uncle to 32nd U.S. President Franklin Delano Roosevelt). 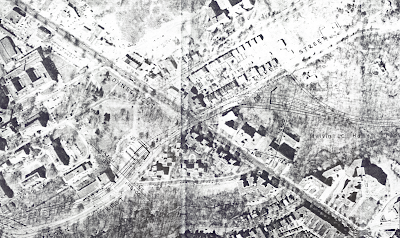 Stopping the NW D.C. Freeway planning stopped any further design evolution – something conceivably advance able with the idea of a subsequent look at a deep drilled tunnel in the Cathedrial Heights general area and/or parallel to Glover-Archbold Park that would be significantly longer then that to skirt Sidwell Friends, though providing a significantly shorter direct route.

That would not necessarily stop freeway planning, with a faction from Bethesda pushing the idea of constructing the 1959 Mass Transportation system’s North Central Freeway along Georgia Avenue- an idea with far greater impacts then the 1959 NW – Cross Park Freeway.

Meanwhile another faction or factions favoring I-70S uphill parallel (via the former trolley right of way) to the Canal Road corridor- seemingly a more direct route from the White House to this Burning Tree Country Club.

Clearly there is far more to this story to discover.
Posted by Douglas Andrew Willinger at 6:27 PM

Eisenhower simply did not pay much attention to cities. In general, his leadership style was to delegate authority and let his underlings deal with petty details like the routes of urban freeways.

However, the position of his adviser, General John S. Bragdon, was unequivocal: freeways generally should be routed around cities and not enter them; they should end at spurs that connect to urban arterials. There should be no inner beltways, no freeways intended to handle primarily local traffic, and any such facilities should be a local, not federal responsibility. Bragdon's opposition was not social or environmental; urban freeways were simply too expensive.

Bragdon stated repeatedly that Eisenhower agreed with these guidelines. The president was, at the very least, sympathetic to Bragdon's line of thinking, because in 1959 he directed Bragdon to pursue a broad investigation and prepare a report on general freeway policy and cost saving measures.

Bragdon presented his report to the president in April 1960, but was outmaneuvered by urban and freeway interests and their allied bureaucrats and appointees. Shortly afterward, the Secretary of Commerce announced there would be no cutbacks in urban interstate highways. That was likely the high point of pro urban freeway policy.