Cancelled D.C. I-95 next to Catholic University of America 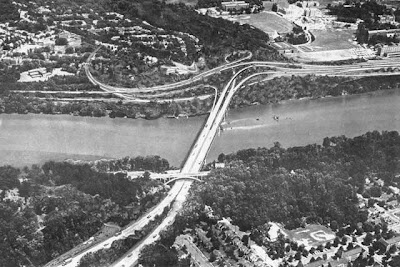 The canceled I-266 Three Sisters Bridge- pointing at Georgetown University

Vatican II affirms Catholic doctrine dating back to 1302, when Pope Boniface VIII asserted that “it is absolutely necessary for the salvation of every human creature to be the subject of the Roman Pontiff.” This was the inspiration for the Papacy to create the USA that materialized in 1776, by a process just as secret as the Reagan-Vatican production of Eastern Europe in 1989. What? American government Roman Catholic from the beginning?

Consider: the land known today as the District of Columbia. Bore the name Rome in 1663 property records, and the branch of the Potomac River that bordered Rome on the south was called the Tiber. This information was in the edition of the Catholic Encyclopedia’s article on Daniel Carroll. The article specifically declaring itself of interests to Catholics” in the 1902 edition, was deleted from the New Catholic Encyclopedia (1967). Other facts reported in 1902 and deleted from 1967. For example, when Congress met in Washington for the first time in November, 1800, “the only two really comfortable and imposing houses within the bounds of the city” belonged to Roman Catholics. One was Washington’s first mayor, Robert Brennt. The other was Brent’s brother in law, Notley Young, a Jesuit priest.

Daniel Carroll was a Roman Catholic congressman from Maryland who signed two of America’s fundamental documents, the Articles of Confederation and the United States Constitution. Carroll was a direct descendant of the Calverts, a Catholic family to whom King Charles I of England had granted Maryland as a feudal barony. Carroll had received his education at ST. Omer’s Jesuit College in Flanders, where young English speaking Catholics were trained in a variety of guerrilla techniques for advancing the cause of Roman Catholicism among hostile Protestants.

IN 1790, President George Washington, a Protestant, appointed Congressman Carroll to head a commission of three men to select land for the “federal city” called for in the Constitution. Of all places, the commission chose Rome which at the time consisted of four farms, one which belonged to ..,. Daniel Carroll. It was upon Carroll’s farm that the new government chose to erect its most important building, the Capitol.

The American Capitol abounds with clues of Roman origins. “Freedom”, the Roman goddess whose statue crowns the dome, was created in Rome at the studio of American sculptor Thomas Crawford. We find a whole pantheon of Roman deities in the great fresco covering the dome’s interior rotunda: Persephone, Ceres, Freedom, Vulcan, Mercury, even a deified George Washington. These figures were the creation of Vatican artist Constantantino Brumidi.

The fact that the national statehouse evolved as a “capitol: bespeaks Roman influence. No building can rightly be called a capitol unless it’s a temple of Jupiter, the great father god of Rome who ruled heaven with his thunderbolt and nourished the earth with his fertilizing rains. It it was a capitolium, it belonged to Jupiter and his priests.

Jupiter’s mascot was the eagle. ... 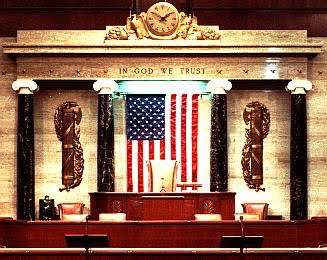 Fascism nay be an ugly word to many, but its stately emblem is apparently offensive to no one. The emblem of fascism, a pair of them, commands the wall above and behind the speaker’s rostrum in the Chamber if Representatives. They’re called fasces, and I can think of no reason for them to be there, other then declare the fascistic nature of American republican democracy. A fasces is a Roman device. Actually, it originated with the ancient Etruscans, from whom the earliest Romans derived their religious jurisprudence nearly three thousand years ago. Its an axe head whose handle is a bundle of rods tightly strapped together by a red sinew. It symbolizes the ordering of priestly functions into a single infallible sovereign, an autocrat who could require life and limb of his subjects. If the fasces is entwined with laurel, like the pair on the House wall, it signifies Caesarean military power.

As we shall discover in a forthcoming chapter, John Paul does not hold that title alone. He shares it with a mysterious partner, a military man, a man holding an office that has been known for more then four centuries as “Papa Nero,” the Black Pope. I shall present evidence that the House fasces represent the Black Pope, who indeed rules the world.

Later, I will develop what is sure to become a controversial hypothesis, that the Black Pope rules by divine appointment, and for the ultimate good of mankind.

An entity considered a supreme bridge builder, will conversely mean that entity is that which decides to build or not to build a bridge.

The Significance of the Waffling
http://wwwtripwithinthebeltway.blogspot.com/2010/05/significence-of-waffling-on-b-north.html

A Sampling of Attitudes Towards D.C. I-95 (Jesuit-CUA attitude: Keep it far away from us)
http://wwwtripwithinthebeltway.blogspot.com/2007/02/sampling-of-attitudes-towards-dc-i-95.html

Posted by Douglas Andrew Willinger at 1:13 AM