Concept 5 preserves the most space alongside the SE Freeway, thus best facilitating the freeway's lowering/tunnelization, ESPECIALLY if it shifted the new northern tunnel closer to the new southern tunnel, rather then using the existing tunnel's centerline. Concept 5 avoids the waste of filling in a new excavation via making the new cut into a new tunnel, and furthermore preserves part of the existing tunnel's excavation for the outboard portion of the future underground SE Freeway. 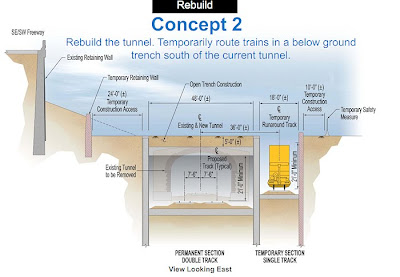 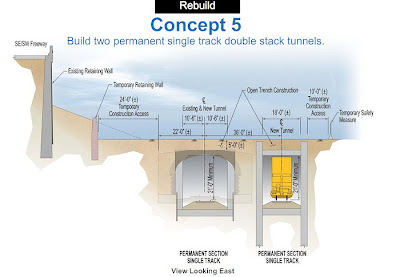 The report also includes options of a temporary cut to the north of the existing tunnel, even though that provides less space for lowering-covering the freeway, but may run into issues with the existing elevated freeway's underground piling supports. Concept 2 is essentially CSX's traditional preferred plan, with Concept 5 a recent addition.

More from JD
http://www.jdland.com/dc/index.cfm/3586/Virginia-Avenue-Tunnel-Project-Concept-Designs-Unveiled/
Posted by Douglas Andrew Willinger at 3:18 AM