It's good they are considering something with the Beltway in Maryland, especially the segment alongside President Eisenhower's favorite hang-out; but it's a continuing testimony to the disproportionate influence of the Master's of CUA & Georgetown U in keeping the freeways away 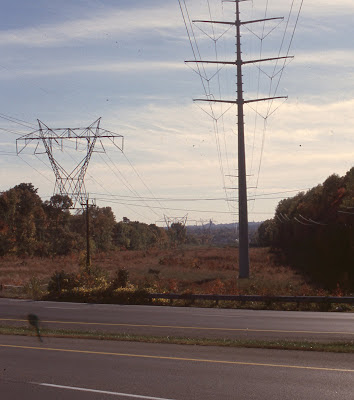 When they finally build PEPCO I-95, southbound people shall be able to see the rotunda of what is now CUA

Maryland’s top transportation priority should be a $5.8 billion project to widen the entire Capital Beltway, from the Woodrow Wilson Bridge to the American Legion Bridge, a leading national transportation group said Wednesday.

The first step would be the investment of $800 million to relieve the weekday congestion between Interstate 270 and the American Legion Bridge by widening the roadway, adding High Occupancy Toll (HOT) lanes and designating lanes where the direction of traffic could be reversed to accommodate the flow of the morning and evening rush hours.

In a report released Wednesday, the group said that Maryland’s recovery from the recession and its future economic viability depended on investment in relieving congestion and improving mobility.

The cost of the top 10 projects TRIP (The Road Information Program) listed amounted to almost $13.7 billion.

The Gov. Nice Bridge is substandard and doesn’t meet needs at peak hours. The report projected that by 2025 weekday bridge traffic will increase by 45 percent and weekend traffic by 33 percent.

The Baltimore beltway project would require rehabilitating or replacing three bridges at an estimated cost of $85 million.

The proposed 16-mile Purple Line is estimated to carry 60,00 daily riders by 2030, with 21 station stops. Maryland transit planners are seeking federal funding for half of the construction costs and have said it would open in 2020 at the earliest.

Widening Route 5 would relieve east-west congestion in Prince George’s and encourage development along the corridor.

Widening three miles of Route 295 from Route 100 to I-195 would ease access to Baltimore-Washington International Thurgood Marshall Airport.

The Red Line Light Rail Transitway is projected to serve 57,000 Baltimore area riders per day in 2030, provide faster, more reliable transit in congested corridors and provide a connection to other transit services.

The widening of Route 29 northbound from Seneca Drive to Route 175 would relieve commuter congestion through Columbia between Washington and Baltimore. The southbound section already is three lanes.

Construction of the Route 97 interchange would relieve congestion and provide bicycle and pedestrian facilities. It also would speed access to and from the Intercounty Connector and regional corridors of I-95 and I-270.

All well and good, at least in basic principle.

But just look at a map.

They say widen the Capital Beltway and do the improvements to the outside.

All the while they neglect the missing inner radials and upper downtown Beltway, which can be sensible routed almost entirely via existing right of ways and be enclosed (cut and cover tunnel) to shield local neighborhoods, while providing a shorter and hence more cost effective solution providing greater benefits. Notably the "Grand Arc" Mall Tunnel which I first had published in the July 1997 Takoma Voice, provides a cut and cover design solution for the North Central Freeway with the added benefit of the new northern mall and uncovering of upper Tiber Creek culminating in a waterfall at the site of the ill advised Washington Gateway real estate development project.

Yet since, the authorities have shown only this new fixation upon pretending that the massive inside the Beltway 'de-mappings' are not worthy of review, as if such de-mappings sold on the premise that highways would not be needed because the world would run out of petroleum by sometime during the 1990s where saroscant- irregardless of the sheer irrelevance between the political sloganeering and the physical realities.
Posted by Douglas Andrew Willinger at 10:16 PM