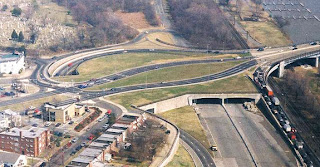 Eastern end of Washington, D.C.'s SE Freeway beneath Pennsylvania Avenue-Barney Circle
note Congressional Cemetery at upper left, and the Anacostia River at upper right.
Extension to East Capitol Street canceled during the mid or latter 1970s, vis a design first officially adopted about 1963, replacing the earlier proposals for a depressed freeway on a new swath alongside 11sth Street SE/NE.


A proper design could build this with an enclosure atop in the fashion of the existing Barney Circle Overpass - Above Ground Tunnel, with the added fashion of extending Washington, D.C.s Monumental Core eastward- rather than having such merely to the west.  This would be easy to do, with the freeway extension to East Capitol Street, owing to it being somewhat cut into an existing hillside, both to the west and to the east of Barney Circle.

A recent report included illustrations of various cross sections essentially making the segment to the west as an above-ground tunnel, yielding maximum benefit for the broadest segment of society.  Strangely that idea is only conveyed by the illustration, with ZERO recognition in the text, which merely focused upon the restored street grid atop.

The existing plan to destroy the approaches to and beneath Barney Circle should be immediately abandoned, and replaced with a reconstruction with a minimum of 4 lanes per direction of undercover freeway, taking advantage of it being largely cut int the side of an existing hill, and with a look towards a design to permit some air rights development, with southern extensions of the existing north-south surface streets.

Ideally, this should be accompanied via reconstruction of ramps to and from the 11th Street Bridge, to more equitably handle the traffic burden, rather than the current plans for this to serve PRIMARILY as a dip down into SE east of the Anacostia, as yet another text book example of a more affluent area getting over on a less affluent area.

I-295 East Leg to East Capitol Street and the SE Freeway at Barney Circle
http://wwwtripwithinthebeltway.blogspot.com/2007/03/i-295-east-leg-to-east-capitol-street_17.html

Posted by Douglas Andrew Willinger at 12:00 AM