Outside the Beltway, between Baltimore, Maryland, and the Delaware line 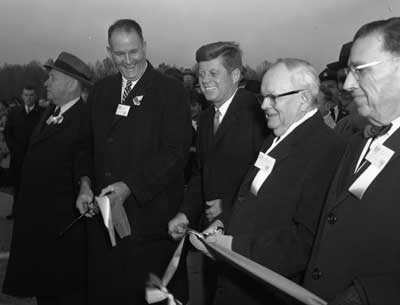 On November 14, 1963, President John F. Kennedy dedicated the Delaware-Maryland Turnpike, the first completed section of I-95. The ribbon-cutting event for the 59-mile strip of highway would be Kennedy's last appearance at a public works project, prior to his assassination eight days later. Delaware officials appearing with Kennedy were Governor Elbert N. Carvel and Representative Harris McDowell.

Remarks at the Dedication of the Delaware-Maryland Turnpike.

It is a pleasure for me to join the citizens of Delaware and Maryland in opening this new highway. This highway has been built by the dedicated effort of the citizens of these two States, and it joins a great interstate highway which represents a cooperative effort between the United States Government and the people of the various States, through which this long ribbon will pass.

It symbolizes, I believe, this highway, first of all, the partnership between the Federal Governement and the States, which is essential to the progress of all of our people; and secondly, it symbolizes the effort we have made to achieve the most modern interstate highway system in the world, a system which, when completed, will save over 8000 lives a year and $9 billion in cost. And third, it symbolizes the effort which we are giving and must be giving to organizing an effective communication system here in the United States of America.

No industry has a greater impact upon the Nation and no industry has a greater opportunity to affect our economic progress. This administration has proposed a new, comprehensive, national transportation policy, calling for an examination of the relationship between highways, rails, air routes, and water routes, and our goal is the development of the most efficient, economic, and the safest transportation system for all of our people.

Finally, this highway symbolizes a coordinated effort which is consistent with the approach which we must have to the problems in this section of the United States, for it may be only a few years when the whole area, stretching from Washington to Boston, will be one gigantic urban center. We have now undertaken a comprehensive study of all of the transportation needs which this area of the country will require in the coming years. But highway planning is not enough.

Already one-third of the people of the United States live in the 15 States through which this highway will pass. By the year 2000, these States will need to find housing and parks for 23 million more people, an increase of roughly 50 percent in less than 40 years. They will need schools for 6 million more of your children. They will need hospital and nursing homes for some 8 million men and women over the age of 65, compared to 4 1/2 million today. They will need to provide an additional 2 billion gallons of water every day.

Because people several years ago made the plans and took the initiative, this highway is now being dedicated. I hope in the year 1963 we will again take stock of the needs of the country over the next decade and we will begin today, this year, this decade, the things which will make this country a better place to live in for the rest of this century.