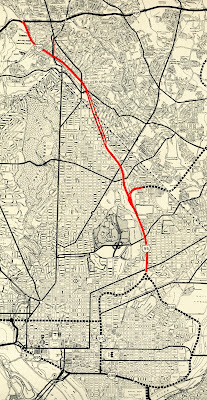 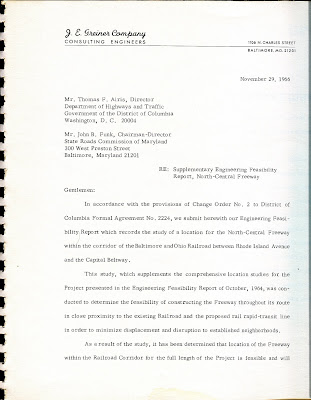 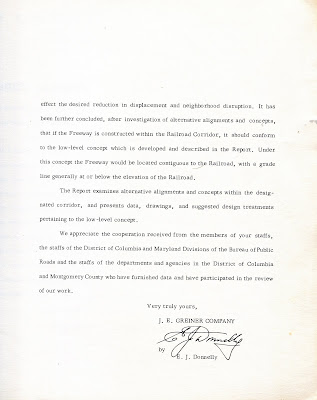 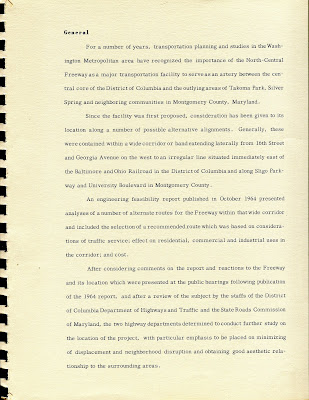 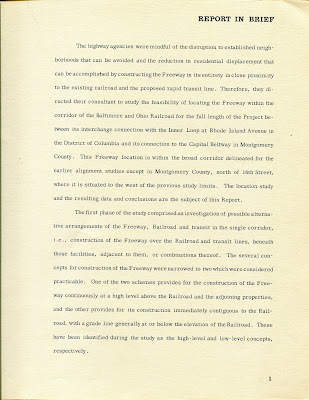 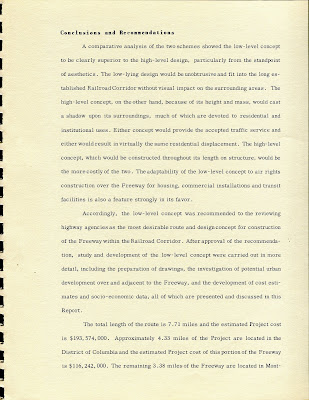 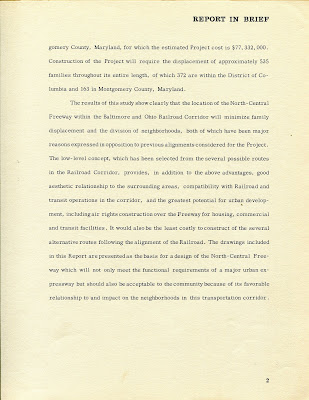 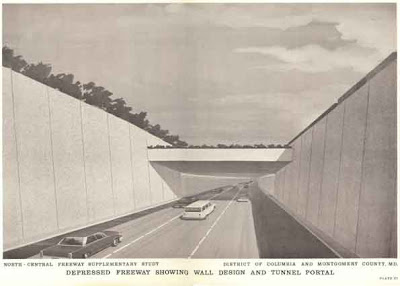 In accordance with the provisions of Change Order No. 2 to District of Columbia Formal Agreement No. 2224, we submit herewith our Engineering Feasibility Report which records the study of the location for the north Central Freeway within the corridor of the Baltimore and Ohio Railroad between Rhode Island Avenue and the Capital Beltway.

The study, which supplements the comprehensive location studies for the Project presented in the Engineering Feasibility Report of October 1964, was conducted to determine the feasibility of constructing the freeway throughout its route in close proximity to the existing railroad and the proposed rail rapid transit line in order to minimize displacement and disruption to established neighborhoods.

As a result of the study, it has been determined that location of the Freeway within the Railroad corridor for the full length of the project is feasible and will effect the desired reduction in displacement and neighborhood disruption. It has been further concluded, after investigation of alternative alignments and concepts, that if the freeway is constructed within the Railroad Corridor, it should conform to the low level concept which is developed and described in the Report. Under this concept the Freeway would be located contiguous to the Railroad, with a grade line generally at or below the elevation of the Railroad.

The Report examines alternative alignments and concepts within the designated corridor, and presents data, drawings, and suggested design treatments pertaining to the low level concept.


Top officials of the Bureau have ordered a full review of the plans for the 3 ½ mile road … While it is good practice to disrupt as few people as possible in road building, is it worth the added cost of $22 million?

… Rejection by the Bureau would certainly fan the embers of one of the Washington area’s freeway controversies spearheaded by a group called the Save Takoma Park Committee. It rallied the residents of the middle income suburb composed largely of turn of the century homes on tree lined streets to strident opposition at hearings in Washington and Silver Spring on the original [1964] alignment.

This cheap skate attitude surely served the purpose of poisoning popular sentiment against the B&O North Central Freeway. According to a letter dated June 1, 1967 from Takoma Park resident and former --- to Maryland Governor Spiro Agnew:


Citizens of Takoma Park and Silver Spring had reason for their demonstrations of bitter dissatisfaction with the highway authorities of your predecessor's administration. After we had been given reason to believe that the causes of our protests had been in at least some part overcome, the matter now threatens to break into renewed bitterness. I am sure you will wish to avoid this as much as many of us.

We showed that the methods of traffic projections which were claimed to justify the North Central were fallacious, the results in error by as much as 400 percent. Our contention was tacitly admitted in "re-studied" versions of the proposal made public last year, sharply reducing the original plan of 5 lanes each way.

Notably latter 1966- early 1967 was a time of transition and bureaucratic reorganization, with the U.S. Bureau of Roads being replaced by the then brand new U.S. Federal Highway Authority, with the outgoing administrator Rex Marion Whitton, who served from 1961 to 1966, quoted by the Kansas Evening Star about his retirement that at [the age of] 68

as if on que of an impending planned scuttling.

Was the conclusion of a two year dialog amongst neighborhood groups. Adopted in November 1962 by the JFK Administration; a June 1963 letter signed by JFK ..