A Different Way: the Alexandria Orb 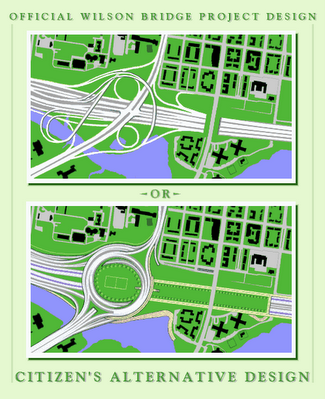 The Alexandria Orb: designed on spec by Douglas A. Willinger: 1998
for Alexandria, Virginia

Instead of pushing highways away, how about instead designing them to better harmonize into their surroundings?

Since one of the main consequences of canceling I-95 through Washington, D.C. was the reconstruction and expansion of the Capital Beltway/Woodrow Wilson Bridge, I felt that this presented the opportunity to advance environmental highway design for the approach at the southern edge of Old Town Alexandria, Virginia, particularly with the Route 1 interchange.


During the 1990s, people in argued over the best approach to the project, to reduce the long term environmental impacts. The project replaces the 6 lane span that was first opened to traffic in 1961, with a pair of 6 lane spans, along with the approaching highway in both and , providing extra capacity. There were three such alternative camps of thought:

Make the river crossing a tunnel: build a tunnel to replace the 1961 vintage 6 lane span, to have the Capital Beltway cross beneath the . Some tunnel options were formally considered during the mid 1990s before the September 1996 selection of the 2x6 pair of medium level drawbridges; these included options to route several hundred feet to the south side of the Hunting Towers which are adjacent to the existing Beltway route; they were rejected for being “too expensive”. As an alternative, a group of residents solicited a firm from to draw a new tunnel option that would be less expensive because it was a shorter route, along essentially the existing Beltway route, along with providing only 10 lanes, and less shoulder space. And also because would minimize the length of the tunnel by locating its portal almost at the very shore line, leaving almost the entire segment an open pit: open without the benefit of extending the proposed Washington Street Urban Deck to the east.

I rejected these three alternatives due to a lack of capacity and flexibility for the project’s 75 year life expectancy and for the gross environmental impacts of the “pus it away” options. I liked the tunnel concept and some of the officially considered options but for the reduction in capacity and flexibility. I feel that the 1999 tunnel alternative would work if, for starters, it had some additional capacity and if it covered its approach through . But the authorities considered a full tunnel crossing with greater capacity to be “too expensive”.

My Idea: Make the Approach a Tunnel: With tunneled roadways being intrinsically more expensive per lane length, I thought about making it possible to apply the basic idea of limiting the tunnel segments to where its advantages were most needed: on land next to existing dwellings, and to waterfronts. Hence, tunnel the Capital Beltway approach along the south edge of Old Town Alexandria, taking advantage of the topography --- aka the hill -- with a significantly longer “ Urban Deck”.

By the time that I began attending meetings at the Woodrow Wilson Bridge Study and in 1994, during the selection process on the basic option and the number of lanes, this future Washington Street Urban Deck was 1,100 feet long. This was considerably longer then the design presented in the initial 1991 project papers, which was only 200 feet long. Since the highway was being essentially doubled in width, I felt that this was a justified move to shield the adjoining and nearby neighborhoods from the extra traffic noise, especially given the mainline ascent to the bridge.

But I felt that it did not go far enough in either direction. Extend it further east up onto the area of the bridge’s abutment would provide noise suppression where its most needed given the greater use of the accelerator to maintain speed on a climb. Also this would create an interesting viewing platform to and the .

Extend it further west past the Hunting Terrace dwellings provides the opportunity for an actual terrace to and along Cameron Run towards the interchange with Route 1.

And what about this Route 1 interchange?

Because I thought of the official design for the new Route 1 interchange to be a monstrosity, I thought “what about something more appropriate?” Something lower. No giant overhead ramps near or over Route 1. Something quite different from conventional freeway design. Something primarily buried for the interchange ramps and the highway mainline, providing superior traffic operation ability and noise suppression, yielding the surface to new monumental parkland via a monumental new traffic circle.

In late 1996 or in 1997 I made a sketch of the area with an urban deck extended, though not incorporated with the Route 1interchange, which this sketch incorporated the official design for this interchange.

Starting around January 1998, I began sketching a schematic for that site of a basic underground highway helical interchange. 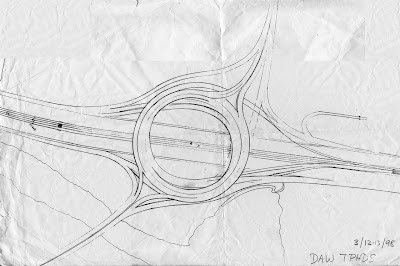 I followed that by March with an overlay over an 8 ½ by 11” overhead view of the existing interchange. From this, I made multiple photocopies which I pasted to card, cut and glued together into a primitive model, which I began showing people at various project related events, such as a rally held in front of the Alexandria City Hall, where I met various people. One of these people would be an employee from within the government that would be logical to approach. He invited me to his office and showed a definite interest in my design; he asked me to have it include a tunnel for Route 1, which I did in the subsequent design in AUTOCAD. 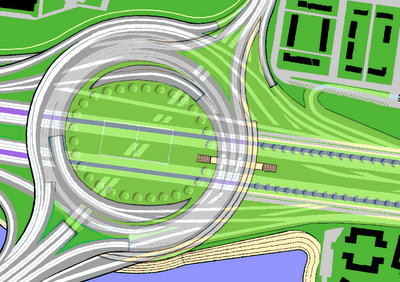 for 12 lane bridge with Purple Line

with extended urban deck to terrace to Hunting Creek

By May 1998 I began the basic AUTOCAD drawing, refining it through the summer and into the autumn. In late November 1998 I first brought print outs of the drawing to one of the official meetings of the replacement project, namely the Stakeholder's Participation Panel on the Washington Street Urban Deck and Route 1 interchange.

On December 22, 1998 I filed copies with the U.S. Office of Copyrights. This turned out to be exactly one year prior to the Wilson Bridge Project's Draft Environmental Impact Statement (DEIS) of December 22/23, 1999.

I mailed this drawing to the above employee from the government, to show to his/her superiors. In 1999 and 2000, I brought copies of this drawing to various such public meetings.

Back then, I figured that adopting the Alexandria Orb design concept would add at least $100 million to the $2.2 billion Woodrow Wilson Bridge Project, which budgeted $600 million for the Route 1 interchange, and that this would be variable by staging some portions of the deck, for instance adding the deck area within the circle later. This was of course figuring that we would not have to wait until virtually completing the earlier design first to see how much it would be despised before then tearing it down (wasting $600++ million) to then adopt the Alexandria Orb. 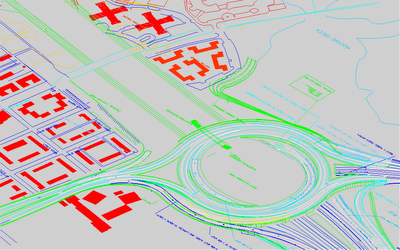 Alexandria Orb looking from the northwest