I-95 North Central Freeway- Brookland/CUA-Rhode Island Avenue area
District of Columbia Interstate System, by DeLeuw, Cather Associates and Harry Wesse & Associates, LTD, 1971, prepared for the District of Columbia Department of Highways and Traffic, in cooperation with the U.S. Department of Transportation, Federal Highway Administration.
This represents the last formal planning study design for the B&O Low Level Route I-95 Low Level proposal along today's Red Line in the vicinity of the Rhode Island Avenue and Brookland/CUA WMATA Stations.

These plans would have removed and replaced 34 dwellings in western Brookland near the railroad's east side where this highway route would have ran from the vicinity of Catholic University of America and to the south. Unlike the 1964 and 1960 plans it would spare the historic Brooks Mansion.

It would have furthermore spared Brooks Mansion from the noise of the traffic of this 8-10 lane depressed highway, as this 1971 proposal has this as a cut and cover tunnel extending from near Rhode Island Avenue to a few hundred feet north of Michigan Avenue. Under this plan the space atop would be used for replacement dwellings, retail stores (including a supermarket on the north side of Michigan Avenue), and community uses. 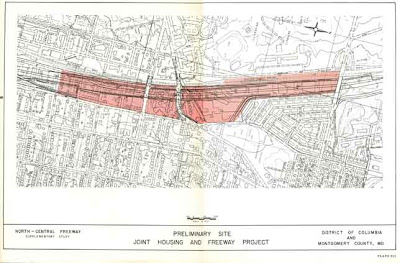 1966 North Central Freeway Study
This general concept of covering I-95 in the Brookland/CUA area also appeared in the 1966 B&O Route North Central Freeway study, though oriented further to the north, extending fully north of the main campus of Catholic University of America, but not as far south as Rhode Island Avenue.

As these plans included highway with railways, the decision to cancel the B&O Route North Central/Northeast Freeway left Washington D.C. with a transportation network that would be less multi-model.
Posted by Douglas Andrew Willinger at 12:10 AM