It succumbed to a form of resentment politics.

The B&O Route North Central Freeway was promoted by the Administration of John F. Kennedy via the report of November 1962, as the replacement of the originally envisioned three separate freeways indicated by 1959 Mass Transportation Plan.

It adopted a different route for the I-95 Northeast Freeway upper right segment of the Y then that of the 1960 I-95 Northeast Freeway study, which adopted the RR route that was later termed the North Central Freeway. It abandoned the route through and alongside property that had been openly opposed by the Roman Catholic Church. Instead it would employ the corridor, shown in the planning from 1963 until February 1973.

The B&O route NCF was undermined by the 1963-64 NCF study. Rather then adhering to the B&O Y Route concept, it studied 37 options, many nowhere near the railroad, and with a recommendation for a route partially along the railroad but with significant deviations in and Brookland in DC.

In 1966 a supplementary study drew up plans for a B&O Route NCF.

It was undermined by the authorities suggesting that the 1964 plan would be built rather then the 1966 plan. The influential generally pro-highway planning group the Council on the Federal City made much the same mistake of suggesting the 1964 plan for short term expediencies of time and money, in a report of their’s published only weeks before that of the 1966 NCF supplementary study.

It was also undermined by the suppression of efforts to re-open the planning of the North West Freeway, particularly in downtown which ended up being largely torn down and replaced with new real estate development induced by the WMATA Red Line Subway, and which would have taken about 74 houses for the corridor in DC. A January 1965 statement by President Lyndon Johnson that he saw no need in the “foreseeable future” for a corridor freeway reportedly inflamed opponents of the NCF.

Together, this was basically stating let’s not build a freeway on a more direct route with far less net displacement in a wealthier area, but let’s build one on a longer out of the way route 1/3 mile east of the railroad through Takoma Park taking 471 houses in 1 mile.

Hence most people reacted by simply opposing the North Central Freeway rather then call for a design true to the 1962 proposal. In my review of the papers (Emergency Committee on the Transportation Crisis) at the MLK Library Washingtonian Division, and those (Peter Craig and the Committee of 100) at the GWU Gellman Library Special Collections Division, I found an overwhelming amount of strict opposition, though inspired by the 1964 plan be nonetheless organized around the time that the supplementary 1966 plan was published.

No wonder why Sam Abbott and others would be able to strategically target the NCF via protesting the mere 69 houses in Brookland, just across the railroad from the southern end of Catholic University of America, even though this would ultimately contribute to greater numbers being demolished in Virginia for the Springfield interchange and the Woodrow Wilson Bridge replacement project in Alexandria. Hence, in such a climate of crafted intolerance, official planning efforts to construct significant portions of the NCF as cut and cover tunnel, and to replace and displaced dwellings to avoid a net loss of such were basically ignored as writers appealed to such resentment politics for the basic goal of keeping I-95 away from the area of that railroad corridor. 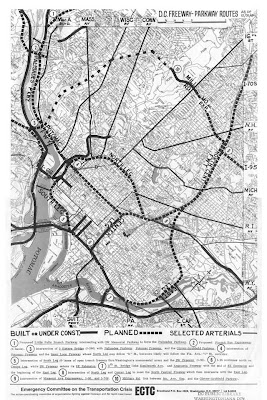