Let's stipulate that graft is bad.

And yet: 's Big Dig, on the whole, may turn out just fine.

The most expensive public-works project in history -- initially priced at $2.5 billion, now speeding past $15 billion -- has long been a national joke, an endless saga of tunnel leaks, corruption probes, scathing audits, patronage hires and politically wired builders with all the effectiveness of the first two little pigs. The joke ceased to be funny last month after 12 tons of ceiling panels collapsed in a Big Dig tunnel, crushing a car and killing a mom. There is no way to defend the negligence, profligacy and perennial mismanagement that have soiled the project's reputation.

But the low-rent scandals surrounding the megaproject have obscured its high-minded achievements: knitting together a city torn apart by bad planning, using highway funds to reduce rather than promote sprawl and harnessing the power of government to fix government mistakes of the past. The Big Dig is a throwback to a time when Americans cared about cities, and their government tried to achieve big things that didn't require the invasion of other countries.

The Big Dig, in essence, is a bipartisan effort to undo some of the damage of urban renewal. In the 1950s, well-intentioned planners bulldozed 1,000 homes and businesses to clear a path for the Central Artery elevated highway, an ugly gash through the heart of that cut off the city from its waterfront. It was supposed to eliminate blight and traffic, but it had precisely the opposite effect, creating a rusty eyesore that quickly became one of 's most congested strips of asphalt.

The Big Dig demolished the Central Artery and diverted its traffic beneath the city, an engineering feat that has been chronicled in PBS and Discovery Channel documentaries. (It was done without shutting down the city, which was like performing open-heart surgery on a patient running a marathon. And all affected homes and businesses were compensated -- sometimes excessively so.) The expressway eventually will be replaced by a ribbon of urban parkland, but its absence has already reconnected the city to its long-abandoned waterfront, which is experiencing a renaissance. The project also includes a tunnel to , a gorgeous bridge over the and a slew of transit projects, including new commuter rail lines to the suburbs and better subway connections within the city. And the project has transported 3.5 million cubic yards of fill to a garbage dump called , which has been transformed into a 121-acre recreational jewel, featuring a marina, two beaches, five miles of hiking trails and 28,000 trees.

Michael Dukakis, the former governor whose administration conceived the Big Dig in the 1970s, recently spent his 43rd wedding anniversary on with his wife, Kitty. When he ran for president in 1988, Dukakis was often caricatured as a passionless automaton, but he didn't sound like that when he talked about the old dump. "Oh, it's a magnificent place," he said. "They've built up a real hill on the island, so you've got this incredible 360-degree view of the harbor. And it just sparkles."

It is instructive to compare the Big Dig with the recent $286 billion federal highway bill, a porkfest that focused mostly on new roads that promote sprawl in rural areas and end up increasing traffic congestion. The Big Dig is a porkfest, too -- it never would have started if the late Massachusetts Democrat Tip O'Neill hadn't been House speaker. But it will improve a highway that people already use, while reducing traffic bottlenecks through improved design and the accompanying mass-transit expansion. And it will promote smart growth instead of sprawl, generating jobs, housing and cultural amenities that won't depend on cars in the underutilized waterfront.

The Big Dig, in other words, represents an embrace of the city at a time when skyrocketing gas prices and global warming are making the march of exurbia unsustainable. The project has also removed the city's worst eyesore, and reconnected its core to neighborhoods that were isolated by the Artery.

Fifteen billion dollars is still a huge amount to pay. (Rep. Barney Frank, a Massachusetts Democrat, once suggested that it would be cheaper to raise the city than to depress the Artery.) It's worth asking whether the Big Dig's remarkable streak of overruns, indictments and construction fiascos -- the most symbolic was probably the mysterious odor that forced toll collectors to wear gas masks for a while -- was inevitable for such a gigantic government undertaking. It is not a coincidence that "big government" has such a sketchy reputation. Last week, Massachusetts Gov. Mitt Romney (R) apologized for making a racially insensitive comparison after he called the Big Dig a "tar baby," though no one disputed his point about the political danger of big-government projects.

But the moon mission was a big-government project, too, and that worked out all right. Those sparkling waters off are the direct result of another big-government project, the $4 billion cleanup, which was finished on time and under budget -- though not quite fast enough to inoculate Dukakis from George H.W. Bush's filthy-harbor ads in 1988. And there are still plenty of big-government projects with worthy goals in the works, such as the restoration of the Everglades and the reconstruction of .

Those multibillion-dollar megaprojects are off to difficult starts as well, and in this era of small-government rhetoric and big-government spending, it's important to try to figure out why. Dukakis blames the Big Dig's problems on lax oversight of private contractors by Republican governors who didn't really believe in government. Others suggest that the project's problems flowed naturally from its grandiose design.

The larger point is that those problems will eventually be overshadowed by 's remarkable face-lift. Nobody remembers how much the moon mission cost, or whether it overshot its budget.

We remember that it achieved something big. 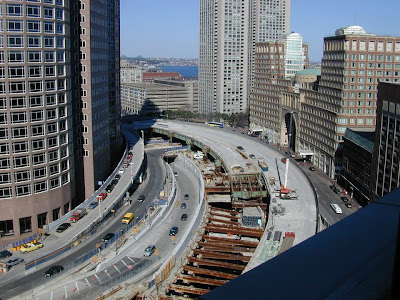