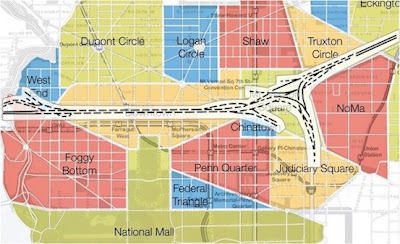 "Today, where that behemoth of an interchange would have sat right on top of Mount Vernon Square, there is instead a metro line below ground, and a mixed-use grocery store and apartment complex above."

The freeway was to be a TUNNEL, with any of the exposed roadways BELOW GROUND-LEVEL, and accommodating new real estate development. 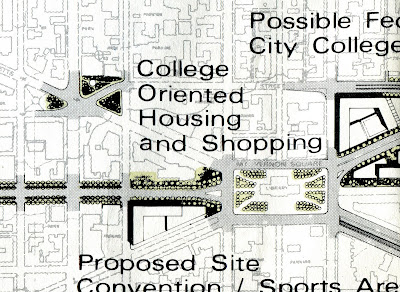 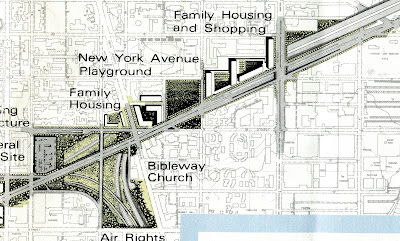 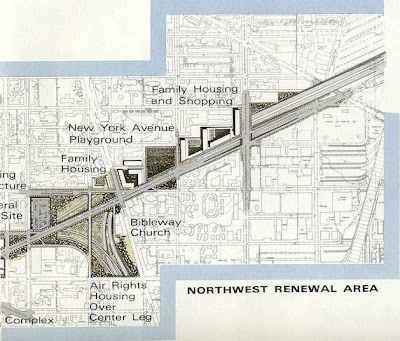 The I-66 portion of the North Leg of the Inner Loop would have extended from the present I-66 terminus near the Watergate Apartments at K Street NW, extending as the North Leg under K Street NW in a tunnel, and emerging east of Mount Vernon Square and junctioning with I-95 about a mile north of the U.S. Capitol Building.

The I-66 portion of the North Leg would have had 6 lanes. The I-66 K Street Tunnel was the solution to the original I-66 alignment that would have run east-west through urban neighborhoods alongside Florida Avenue NW, and between T and U Streets NW about a half mile north of K Street NW. If the K Street Tunnel had been built, it would have been a cut and cover design, about 1.5 miles long, buried out of sight under the straight 147-foot wide avenue, and passing under Mount Vernon Square, and it would have run from near Watergate almost to today's New York Ave./I-395 junction.

The underscores how writers must check facts rather then simply relying upon entities as WMATA, or 'mainstream' media such as The Washington Post, which can't even be honest about the route for I-95, let alone the I-66 K Street Tunnel.