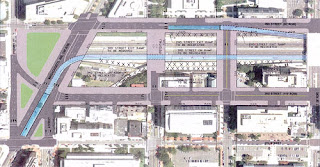 Both designs - Alternatives 1 and 3 - were options in the project's study report.

Both are good designs insofar that they are of the center loader configuration- a basic configuration to which urban freeway access ramps ought to be so constructed, as this eliminates the traffic conflict along the side of the local road by instead placing the freeway bound - or off ramp - traffic in the middle of the local road.

These two options were accompanied by a 3rd option - Alternative 2 - that was not of the center loader design, taking the left-hand curb of southbound 3rd Street NW.

In this blog I reported upon the selection of the design option - Alternative 1- with the center loader configuration upon 3rd Street NW.

The now selected design option - Alternative 3 - is for a center loader configuration, not on 3rd Street NW but instead Massachusetts Avenue NW.

The design now selected would require re-configuring the planned underground parking that would partially infringe upon 8 lane interstate right of way.  Theoretically this could be addressed by reducing the number of underground parking spaces, and/or by an additional lower level, or a greater horizontal surface, with the lack of mention of the latter and the assertion that this nonetheless meaning greater space suggesting using the space that would have been used by the diagonal underground ramp with either of the options - Alternatives 1 and 2 -- for the transition from 3rd Street to I-395.

This letter points out that traffic from the west via Massachusetts Avenue or H Street, making a left turn onto 3rd Street to access southbound I-395 via the existing ramp or Alternatives 1 and 2, would have to travel further south on 3rd Street to access southbound I-395; instead of entering an on ramp to the north of G Street, such traffic would remain on 3rd Street for an additional 3 blocks where new residential development is envisioned, to the existing on ramp just past D Street.

It further states that this option would provide the developer with the most amount of underground space for the real estate project, ostensibly via re-assigning the space of the diagonal ramp transition of the other options.

It furthermore questions the planning process, asking "whether it followed the normal permitting progress, and - if it did not - why did it not?"

An answering letter from Kenner to Cheh defends the change, noting its elimination of the vehicular-pedestrian conflict with the right-hand turn from Massachusetts Avenue to southbound I-395, therefore eliminating one of the major vehicular traffic movements from the Massachusetts Avenue-3rd Street intersection (with all of the options nonetheless requiring traffic from the east to turn left on to 3rd Street to access I-395).

Perhaps the best option, apparently unconsidered officially would be to combine the two options, with center loader ramps on westbound Massachusetts Avenue and southbound 3rd Street, eliminating the former surface intersection conflict while reducing the distance such traffic from the east would remain on 3rd Street, and have the developer make do with less underground parking, or compensate by adding one extra lower level to the parking garage?

Of course this Capitol Crossing air rights real estate development project itself remains seriously flawed for impinging upon the 8 lane interstate right of way, and for eliminating the southbound I-395 off-ramp, as if the Washington, D.C. underground freeway system would never extend past the existing I-395 terminus at 4th Street and New York Avenue- contrary to previously seen public opinion differentiating such from more conventional suburban style surface freeways.

Though the Center Leg planning initiated with extensions with tremendous local impacts in displacement and traffic noise, the freeway planning had gone under a significant design evolution to meet local community concerns; that design evolution would eliminate a northern continuation along New Jersey Avenue, and replacing the proposed extensive new swath North Leg east-west freeway along Florida Avenue and U Street (1955 Inner Loop Report) with a tunnel primarily beneath K Street to the west (1965-1977) and along (1971-late 1970s) and then beneath (1996) New York Avenues to the east.

Such tunneled freeway proposals would be promoted by opponents to the earlier plans, notably Elizabeth Rowe during the 1960s for the I-66 K Street Tunnel, and the D.C. Mayor;s Office under then Mayor Marion Berry who was previously involved with the anti freeway 'Emergency Committee on the Transportation Crisis' in 1996 for the tunnel beneath New York Avenue which had popular local support favoring extending it further east.

Indeed, the northern Center Leg tunnel segment between Massachusetts Avenue and K Street was designed to accommodate the I-66 K Street Tunnel with a pair of one lane underground connectors, with a pair of three lane connections to the east.  However, the K Street Tunnel would be "de-mapped" by 1977 owing to arguments that the world was going to run out of petroleum by the 1990s somehow rendering private automobiles obsolete, and that Virginia was not going to build their connecting I-66 segment- all of which proved false.  And the 1996+ New York Avenue Tunnel planning would fall victim to a parachialist attitude within the government that a tunnel should not be built, with that corridors vehicular traffic all remaining on the surface so as to somehow encourage greater use of the WMATA subway system (despite a lack of such a route along New York Avenue), and to encourage the traffic to instead divert to less affluent areas to the  east of the Anacostia River.

Recent - November 2015 - photographs that I personally took of the current Capitol Cross Air Rights Project may be seen here.

Posted by Douglas Andrew Willinger at 12:15 AM