NCPC Eco District to Lock in Existing I-395 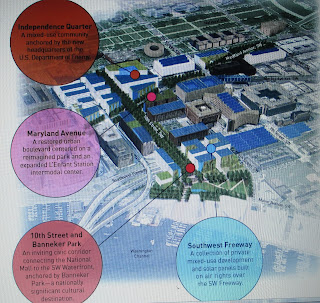 A retreat from their 1998 plan to lower I-395 into a new tunnel beneath Washington Channel which essentially followed the extended Louisiana Avenue axis to a new 14th Street Bridge Potomac crossing.  This new plan instead covers the existing freeway, with buildings to the west of 9th Street SW, and solar panels to the east alongside the 28 notoriously close Capital Square townhouses between 9th and 7th Streets SW.  It would do nothing to add I-395 capacity nor eliminate its dangerous merges.

It would also cover portions of Maryland Avenue occupied by railroad tracks, and extend Virginia Avenue to the west of 9th Street SW.