This alignment follows the Baltimore & Ohio Metropolitan Line from Interchange B northerly through Fort Totten.  Passing under new Hampshire Avenue, it swings to the northeast and again passes under New Hampshire Avenue beyond the District line.  The alignment then enters the Potomac Electric Power Company transmission line right of way and continues along this right of way to a point beyond Northwest Branch Par where it swings onto its own parallel right of way.  It continues west of the University of Maryland to the I-95 Interchange at the Beltway.

This alternative would significantly reduce encroachments on parkland at Fort Totten and Fort Drive.  It would also reduce the complexity of construction in the Fort Totten area.  The route would offer an opportunity for interchange connections with New Hampshire Avenue and Blair Road which would obviate a penetrator road needed under the Fort Drive alternative.  It would provide greater opportunities for intercepting Maryland traffic at interchanges within Maryland, and would more readily attract a part of the traffic which would otherwise be potential to I-70S.

Throughout all portions of the Power Line right of way taken for a highway, all or part of the high tension lines would be placed underground.  This would permit joint use of the right of way as a multi-use transportation corridor with minimal land takings.

This alignment would offer several advantages within the District of Columbia.  The total length of the freeway within the District would be approximately the same as the Fort Drive route.  Construction costs would be substantially less because of less interference with the Metro lines.  While the route would take some parkland along the Baltimore & Ohio railroad tracks, sufficient park width would remain to assure desirable continuity of the Fort Circle concept.

From Interchange B to the Beltway, a freeway on this route would be 8.6 miles long.  It would displace 59 dwelling units and 32 businesses within the District.  Displacement in Maryland would be between 40 and 110 dwelling units, depending on ultimate design and the alignment selected.  The estimated total cost of I-95 on this alignment would be on the order of $176 million.

It was concluded that this alignment should receive serious consideration by both the District of Columbia and the Maryland Department of Transportation if I-70S is eliminated from official plans.  It is emphasized that estimates of displacement and construction costs herein are order of magnitude.  They are based only on preliminary investigations by the Consultant.  the Maryland Department of Transportation has not studied these alternatives in detail, and a decision on any of these alignments would not be reached until after extensive study.

In view of this, this design concepts presented later in this chapter follow the Fort Drive alternative which is the official Interstate cost study alignment referred in the 1970 Highway Act.  The Power Line alignment crossing under New Hampshire Avenue has been noted in Figure VII-27 as an alternative for the I-95 route if I-70S were eliminated. 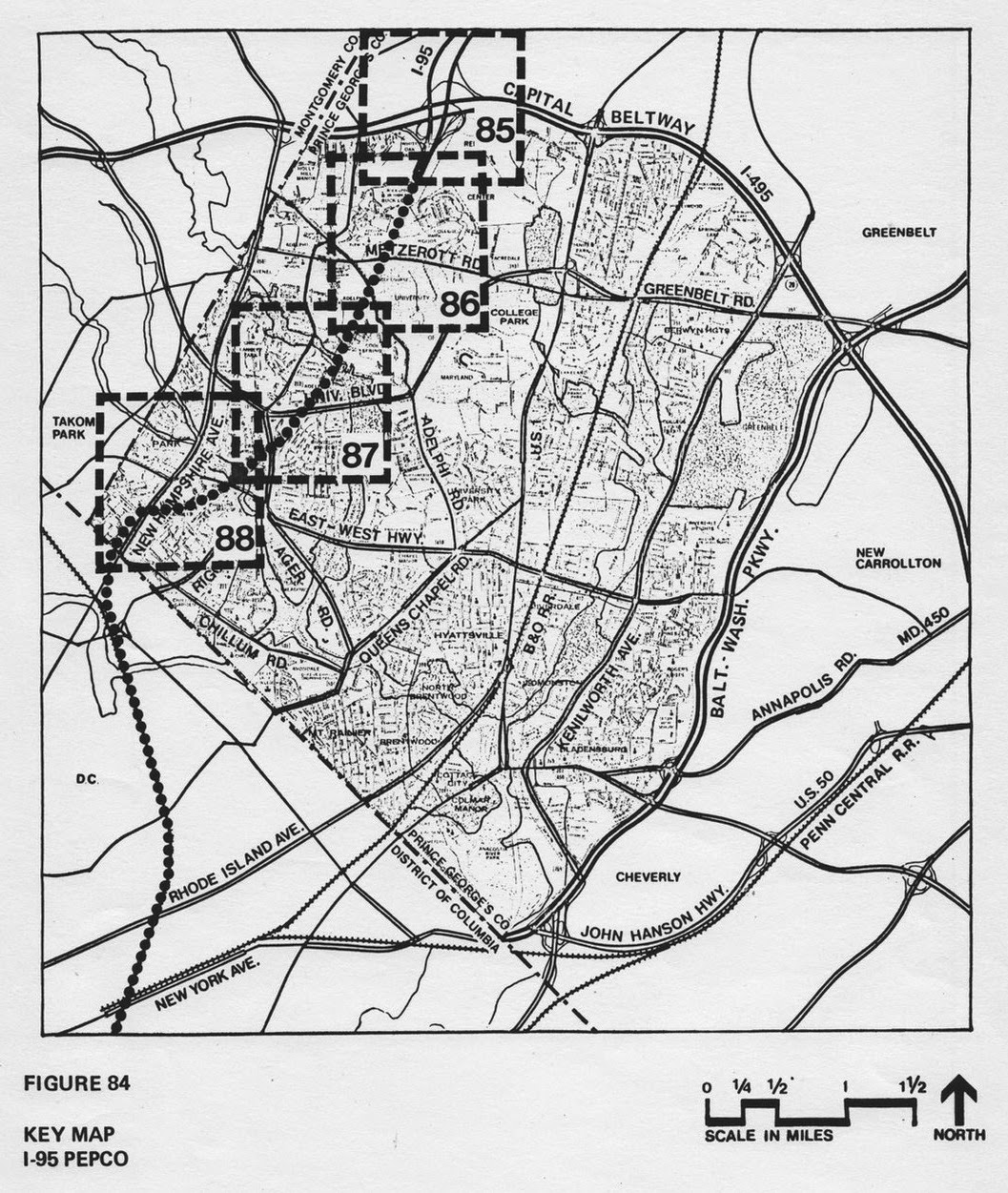 From the 1973 Maryland Transportation Study


The I-95 PEPCO alternative examined in Alternative No. 5 extends from the present terminus of I-95 at the Capital Beltway to the District of Columbia line near the intersection of Eastern and New Hampshire Avenues.  It would connect with a new Northeast Freeway along the B&o railroad in the District.  The basic roadway section section is  depressed open cut with a 2-2-2 lane configuration.  To lanes would be provided in the north and southbound directions plus two reversible lanes in the median.  the reversible median lanes would be used in the predominant direction of traffic, and could be reserved for exclusive use by buses and carpools during peak travel hours.

From the Beltway interchange to north of Metzerott Road the highway would be located on State owned property immediately west of the PEPCO transmission line right if way (Figure 8).  South of Metzerott Road, it would enter and follow the PEPCO right of way to New Hampshire Avenue near Ray Road.  The highway would be grade separated over New Hampshire Avenue and would proceed adjacent to the to the southbound lanes in a depressed open cut section to the District (Figure 8)  A tunnel section crossing New Hampshire Avenue was examined and found not to be practical due to very high costs, problems in grades and retaining wall design, and problems encountered in trying to avoid the power substation located in the southeast quadrant of the Ray Road/new Hampshire avenue interchange.

The highway would be carried in a 750 long tunnel under Northwest Branch.  this configuration would avoid severing the stream valley  across the right f way and would permit unrestricted access between the park areas.  the natural stream bed would have to be relocated during the construction periods but would be reestablished in approximately the same location.

The highway would be bridged over Sligo Creek where the natural topography is a deep gorge.  The structure wold be approximately 25 feet above the stream and would not restrict access between the park areas on either side of the right of way.


Diamond interchanges would be provided at University Boulevard and at East West Highway.  Use of diamond interchanges would permit all construction to take place within the PEPCO right of way.  New coordinated traffic signals would be installed at the intersection of the ramps with University Boulevard and Eats West Highway.  in addition to the 2 full interchanges, a partial interchange located at Metzerott Road would be provided with the university of Maryland Access Road movements to and from the north.

Two options for future disposition of the PEPCO transmission lines were considered (Figure 90):

1.  Bury all of the lines within the existing right of way; and

2.  Bury some of the lines and carry the remainder non single pole structures within, but along the edge of the existing right of way.

In burying all of the transmission lines, the capacity of the main transmission  circuits will be limited due to the inability of the underground circuits to dissipate heat in extremely hot weather conditions.  Some provisions may have to be made for this condition in the way of extra cables of special cooling facilities.  The cost of burying all of the existing 230 kv lines has been estimated at 6.8 million dollars.  Due to the extensive costs at the Takoma substation and the cost of moving the existing circuits underground burying all of the lines would add approximately 20 million dollars to the total cost.

The main factors to be considered in evaluating these options are cost, access to the lines for maintenance and emergencies, and aesthetics.  Burying all of the lines would be the most expensive ad present some problems of access to the lines could be provided in median and shoulder areas.  Another possibility, because of the unique 2-2-2 lane configuration, would be to close a pair pf lane during service and repair periods, and utilize the remaining two pairs of lanes for north and southbound traffic.

The estimate shown in the cost section of this report assumes burying some of the lines.

In addition to the highway and transmission lines, hiker-biker trails were examined along both sides of this alignment.  A air of trails were developed which could tie to a trail in Sligo Creek and Northwest Branch Park as well as along east-west streets that cross the right of way.

All existing road crossings of the PEPCO right of way would be maintained.  Because of the mostly depressed section, the possibility of providing additional crossings, particularly for pedestrians, is strong.


The I-95 PEPCO would be approximately 5.3 miles long from the current terminus south of the Capital Beltway to the District line [4.72 miles or 24,850 within the PEPCO corridor itself], with interchanges at the University of Maryland Access Road [Adelphi Road], University Boulevard and East-West Highway.  Nearly eighty percent of the roadway would be in a depressed open cut configuration.  A short (750) tunnel would be used crossing Northwest Branch. 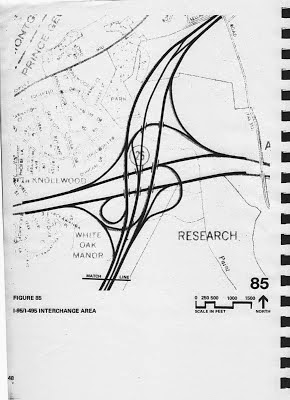 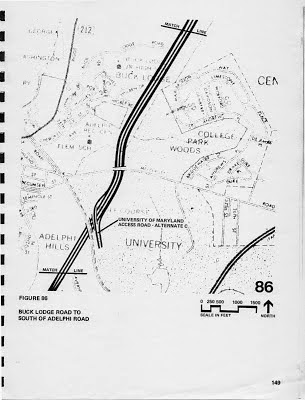 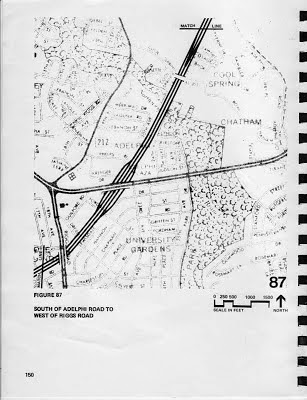 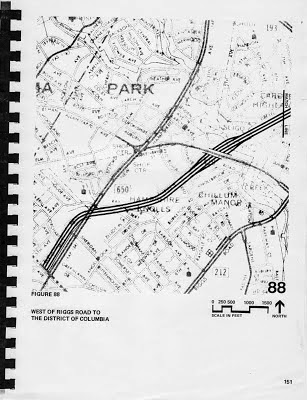 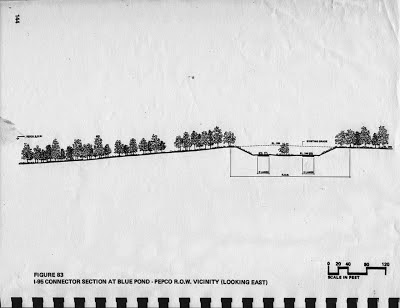 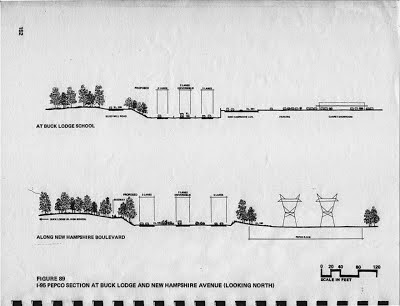 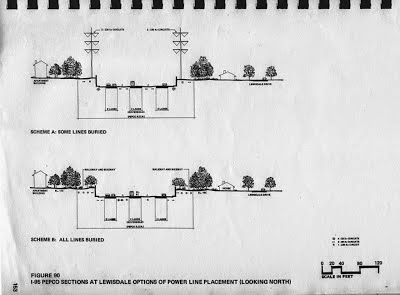 Posted by Douglas Andrew Willinger at 1:04 AM