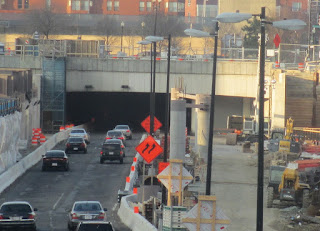 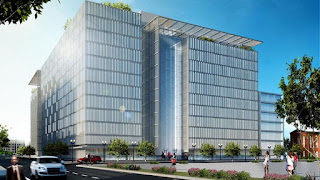 This blog has editorialized against the Capitol Crossing air rights project atop the un-covered trenched segment of Washington, D.C.'s Center Leg Freeway as an ill advised endeavor that constricts the freeways's existing below ground level capacity by over 50% including  its utterly irresponsible constriction of the emergency shoulders- all to increase the developer's profits, so done with no apparent consideration of the costs of replicating the lost capacity, via a perjurious US FHWA of 'no significant impact'.

There is an additional reason to oppose Capital Crossing.  Why more more buildings?   The area of Washington, D.C. has relatively little park space in the area north of the National Mall.  The Center Leg has an existing park atop it for a meagerly single block.

Instead of simply scrapping the existing Capital Crossing project design, why not scrap it radically- eliminating not only the infringing support columns, but as well the monolithic new buildings of which that area has a new abundance of, and build a new park atop?

Especially when the surrounding area is being heavily re-developed!

Have Congress enact legislation to purchase the air rights, scrap the Capitol Cross project, demolish the offending intrusions upon the sunken I-395 right of way, and construct a lid respecting such with a new park atop, perhaps with a hot house for plants, thus providing an oasis for such year round..
Posted by Douglas Andrew Willinger at 11:38 PM