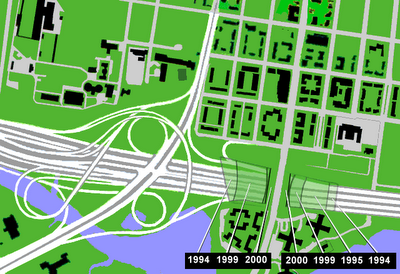 The latter was there to consider this new proposal, that had two versions: the slightly curved Concept "A" "Greetings"; and the straight-edged Concept "B" "Streetscape."

SPP members and the attending public were given the opportunity to speak about the proposal. At the end of this meeting, the project officials asked the SPP for their formal recommendation upon the new deck proposals; I was one among the public speakers who spoke out against shortening the deck. Responding that they had heard too many bad things about the new proposals, the SPP would that day publicly recommend AGAINST the shortening the deck. Of the 7 or so SPP members present, only one voiced the opposite position. I was there to see and hear this.

I was happy to have this opportunity to speak before this SPP, and to see it vote favorably.