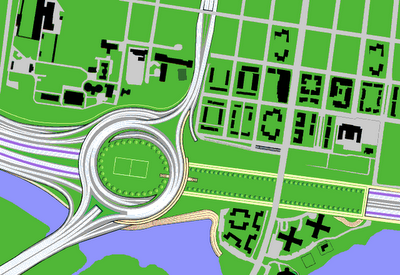 The Woodrow Wilson Bridge Project included a series of “Stakeholder” committees which met on a schedule that I was told was set by the authorities. One of these was the Stakeholder Participation Panel (SSP) on the Route 1 interchange and the Washington Street Urban Deck. I began attending their meetings, which were open to the public, sometime in 1997 or early 1998.

I began showing copies of my Alexandria Orb AUTOCAD drawing to its November 1998 meeting, in order to promote the ideas of the underground helical interchange and of a longer deck with a terrace. This drawing was poster sized, printed on what’s known as a “plotter”- basically an over-sized computer printer. I laid it out on the floor to show it to people, including those from the SPP on the Route 1 interchange and the Washington Street Urban Deck. I remember showing it to John Belshi – and Alexandria citizen who was a member of a group “Coalition for a Sensible Bridge” – and to a few staff members from the Woodrow Wilson Bridge Project.

The SPP meetings went well. I figured that had a base of support, judging from the favorable reactions I got from SPP members. Staffers from the Wilson Bridge Project were there to see this.

I attended these meeting in 1999, which were held monthly IIRC.

For reasons not stated, Woodrow Wilson Bridge Project officials stopped scheduling meetings of the Route 1-Washington Street Urban Deck SPP after either May or June,1999. Subsequently, no such meetings were held until August 26, 2000.
Posted by Douglas Andrew Willinger at 6:43 PM