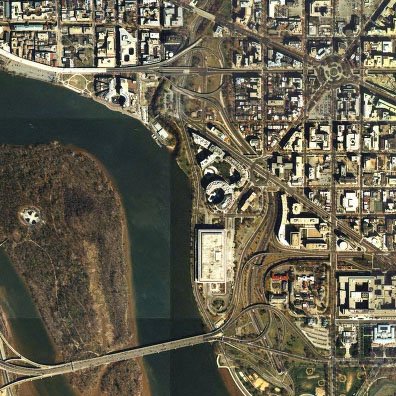 I-66 West Leg
with Theodore Roosevelt Bridge at left,
E Street Expressway at right,
and Whitehurst Freeway at upper left

The I-66 West Leg is that section of stranded freeway in Washington, D.C. that connects with the Constitution Avenue/Theodore Roosevelt Bridge, and runs roughly north-south past the J.F.K.Center for the Performing Arts and the Watergate complex, to end at its interchange with the Whitehurst Freeway and K Street, where its construction was segmented largely due to the planning uncertainties over the I-66 continuation and the I-266 project.

The project displaced 810 or more people (including the E Street Expressway and the approaches to the Theodore Roosevelt Bridge), based upon a May 1962 estimate by Highway Department estimates of a destruction of 160 dwelling units. House District Committee Hearings on "Accelerated D.C. Highway Program," p94 (1962) [from, Freeways and Our City: Transportation Facts; the Committee on Urban Conservation; Peter S. Craig, Sam Abbott and Martin Broffman, 1965]. As with the SW Freeway, the West Leg was accompanied by significant building demolition and replacement (re-development). 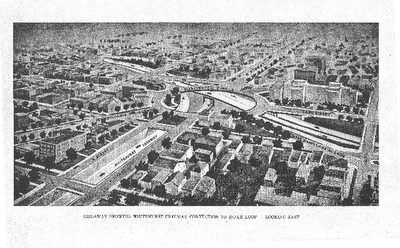 This may be seen at plates 1 and 2 at 1955-62 Plans. This included an underground interchange beneath Washington Circle connecting to the Whitehurst Freeway. 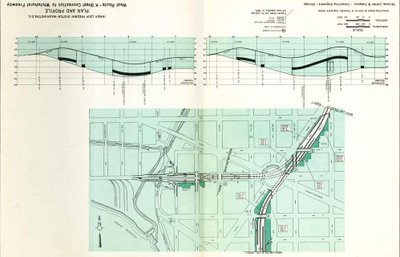 The 1957 North West Freeway study "A Report of the study on the location of Interstate U.S. Route 240 Washington, D.C. June 1957" included a revision to the West Leg route that eliminated the underground interchange beneath Washington Circle, replacing it with an exposed interchange to the west, and with a due north-south route. I need a scan of that plan.

The West Leg underwent at least a third design, as indicated by the curved route adopted for the project that underwent construction around 1963. I have not found anything on the story behind this curve which appears to exist primarily to bend this highway to avoid the building that now houses the Embassy of Saudi Arabia.