Choices to the North, East and South to West! 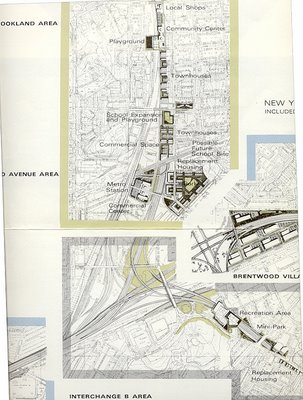 Interchange "B" area
DeLeuw, Cather, with Harry Weese "District of Columbia Interstate System"
November 1971
I-95 (today's I-395) and theoretical I-66 North Leg East east of Florida Avenue to interchange "B" with choices to north, east and south:

Both the I-95 B&O Route North Central and the I-295 East Leg are here shown with cut and cover tunnel segments respectively in western Brookland near Catholic University of America (10 lanes, 3/4 mile long displacing and replacing 34 dwellings, and along Mt. Olivet Road NE, (6 lanes,1/2 mile long displacing and replacing 172 dwellings). The Route 50/Theoretical I-66 New York Avenue Industrial Freeway would have displaced 0 dwellings, owing to the available industrial properties, and was not shown with any such lengthier tunneled segments, but only a few short segments.