The I-95 Center Leg Freeway (known since the 1970s as the I-395 3rd Street Tunnel), is the main north-south highway through the downtown Washington, D.C. Central Business District.

It is located approximately 3 blocks west of the U.S. Capital, between 2nd and 3rd Streets NW/SW.

Overview: The Center Leg was intended from the 1950s through much of the 1970s as the central north-south highway component of the Washington, D.C. Inner Loop Freeway, and hence D.C. I-95.

As such, it was to be an 8 lane below grade highway to connect the Inner Loop Freeway's east west segments, the I-66 (west) and I- 95 (east) segments of the North Leg, with the I-95 South West Freeway and the I-695 South East Freeway, generally as an open depressed freeway -- as it would be built from O Street NW northward to Massachusetts Avenue -- but with the portion southward fully tunneled segment to invisibly pass beneath National Mall and the flanking new Department of Labor and HHS buildings. The Center Leg/3rd Street Tunnel facility was built in 2 separate projects, segmented at Massachusetts Avenue NW. This was due to the planning uncertainties for the connecting highways to its north, the I-66 and I-95 North Legs, radically affecting the Center Leg design and length: aka the shift from the 1955 Florida Avenue/ U Street open depressed and raised berm roadways, to the 1965 and 1971 refinements of the K Street tunnel concepts, particularly with the latter's inclusion of the New York Avenue tunnel to the east of Mt. Vernon Square. Not only were the connections entirely different, this planning change would eliminate northernmost blocks of the 1955 proposed Center Leg.

Hence, the first project, started in 1966 and opened to traffic in 1973, would construct this highway from the SW/SE Freeway interchange northwards only to Massachusetts Avenue.

The second project, started in 1978 and opened to traffic in 1982, would construct the segment from Massachusetts Avenue northward to New York Avenue. Although started after the de-mapping of the I-66 North Leg West K Street tunnel, its design includes the somewhat wider northbound tunnel portal to accommodate.

History: As initially proposed in 1955, the Center Leg was presented with 2 separate design variants:

A full open cut upon a straight alignment where it would cross the National Mall, west-parallel to 2nd Street NW, before turning northwesterly to alignment west-parallel to 3rd Street at Massachusetts Avenue NW, continuing northward between 3rd and 4th Streets NW to just past O Street NW, where the roadways would climb to meet an elevated interchange with the North Leg between Q Street and Bates Street NW, to meet the I-95 North Leg which would generally run south-parallel to Florida Avenue and U Street NW.

A full open cut as as described above to the north of Pennsylvania Avenue NW, and as a cut and cover tunnel to the south where it would cross beneath the National Mall (between Independence Avenue SW and Pennsylvania Avenue NW) with a curved alignment, favored for preserving a stand of trees, and following west-parallel to 2nd Street before turning northwesterly at F Street. 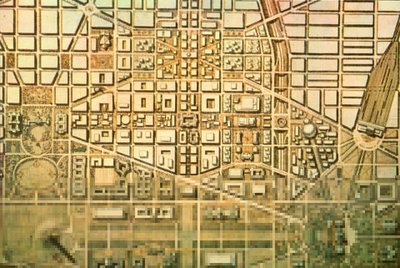 1961 (including un-built extension north of New York Avenue; this alignment would have run between 2nd and 3rd Street to K Street, and from there northwards alongside New Jersey Avenue, hence entirely removing the Bibleway Church at the southwest corner of NY and NJ Avenues, and removing the latter between K Street and Massachusetts Avenue NW)

The initial Center Leg's construction project, which would extend only as far north as Massachusetts Avenue, underwent a radical design change from its 1955 design.

The design adopted would distill the concept of a longer tunneled segment extending one block south and two blocks north of the National Mall, with a straight alignment (instead of the previous -- 1955 proposal -- curved alignment) with the early 1960s concept of "air rights" development with two new Federal government buildings respectively facing the Nation Mall's north and south sides: the U.S. Department of Labor and the U.S. Department of Health, Education and Welfare

The air rights development came as part of what an October 7, 1965 The Washington Post article would call a "2 for 1 bargain" announced the preceding day by Federal and District officials to construct the new Department of Labor Building atop the new highway tunnel on the site of the Esso Building on Constitution Avenue, between 2nd and 3rd Streets NW. This article would describe this as "Washington's first "air rights" structure over a highway", bringing an estimated 7000 employees "now scattered in 16 places around the City", in a new building with a Public Works Commission budget of $47.6 million, which would include a ventilation system serving the tunnel's northern half. This shift from curved to straight alignment came the following month, November 1965, with the announcement of a beautification project for the National Mall , which would include a reflecting pool 2-3 blocks west of the U.S. Capitol Building. The curved alignment had been favored for avoiding the older trees that had lined the outer Capitol grounds in a curved axis approximating 3rd Street; the new straight alignment would be 250 feet shorter and some $2 million less expensive, which would instead be spent upon the new reflecting pool, which as designed would have required these trees' removal. As reported by The Washington Post, November 1, 1965, this project, approved by the Commission of Fine Arts, the National Park Service and the Architect of the Capitol, would close a some of the surface streets that cross this portion of the Mall, and construct a new curved avenue connecting Louisiana Avenue and Canal Street

The project to construct the Center Leg south of Massachusetts Avenue began in 1966 with the demolition of the buildings in its path to the north of the open area of the National Mall, including the former home of Stephen Douglas at 201 I Street NW, declared a landmark by the National Capital Planning Commission and the Fine Arts Commission, built in 1857, and demolished late 1965 as reported by The Washington Post November 11, 1965. The largest building demolished would be the Esso Building on the very site of the Labor Building to be; the demolition of the Esso Building would start in December 1967. 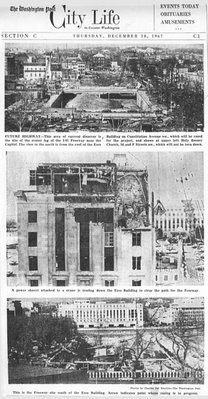 The Center Leg's envisioned role was fated to change radically during the time of its construction from 1966 to 1973.

At the start of this project's demolition, excavation and construction, the Center Leg with its Mall Tunnel was envisioned as part of a completed I-95 route through Washington, D.C., accompanied by the full Inner Loop Freeway system.

When the Center Leg was completed and opened to public vehicular traffic in 1973, its role -- both immediate and near term future -- had radically changed. It was to be future D.C. I-95. It was used as a parking lot during the later stages of construction by students and faculty from the nearby law schools of Howard University and of Georgetown University. It became a newly opened stub highway ending at a wall with all northbound traffic routed to its Massachusetts Avenue off-ramp. as well as what it be connect to to the north.

The plans for its northern and north-eastern continuations, the Center Leg extension and the North Leg East remained within official planning. But this would be a time of a relatively rapid phrase of following highway cancellations, particularly Maryland's July 1973 abandonment of the I-95 PEPCO Northeast Freeway.

After its opening in 1973, subsequent highway segment cancellations would effectively stall the planning and construction of just what would be built northward from the Center Leg's 8 lane truncation at Massachusetts Avenue.

Without the B&O route, the I-95 Center Leg would have still connected with the I-66 K Street/New York Avenue Tunnel to the west, and with the I-95 North Leg with a cut and cover tunnel immediately north-parallel of New York Avenue, connecting to the New York Avenue Industrial Freeway via the parallel railroad-industrial corridor to Maryland Route 50. As planned up until 1976, I-95 would have so continued to the Route 50 interchange with the Baltimore-Washington Parkway, with the latter rebuilt as the I-95 continuation north of the I-495 Capital Beltway to a connector to existing I-95 near Laurel, Maryland. That year of the Bicentennial would bring about an end to any completed Washington, D.C. I-95, along with the cancellation of the I-66 North Leg K Street Tunnel for the sake of speeding construction of the Washington Metropolitan Area Transit Authority (WMATA) Rail system via transfer highway funds to rail, and subsequently the I-295 East Leg. In 1977, the Shirley Highway portions of I-95 northward from the Capital Beltway in Virginia, the 14th Street Bridges, the SW Freeway and the Center Leg were renumbered as I-395, with the I-95 designation signed onto the south-eastern portion of the Capital Beltway between the I-95 interchanges in Maryland and Virginia.

Without any I-95 route through Washington, D.C., the Center Leg could have still connected with a North Leg, connecting to a New York Avenue Industrial Freeway and ultimately Maryland Route 50. Largely due to the fact that it was the planning for the relatively brief section of North Leg that had the highest residential demolition, this connection would not happen. Though such a highway parallel to New York Avenue would have ran almost entirely via existing right of ways, existing Maryland Route 50 and the Amtrak corridor in D.C., the area consisting of the final 3 blocks before these railroad-industrial brown field corridors, from the intersection of 3rd Street NW, New York and New Jersey Avenues to North Capital Street is residential. Here lay the horizontal-pointing to the right, triangular shaped north-eastern-most tip of residential Washington, D.C. -- Victorian brownstone/townhouse style -- that has traditionally greeted incoming visitors. Even with the open area of the New York Avenue Playground just west of 1st Street NW, this surface project extension -- as them planned -- would require displacing 600-848 residences. By 1979, the North Leg tunnel north-parallel to New York Avenue would disappear from COG plans.

While the late 1970s would not bring about any North Leg, planning and construction went ahead with a down-scaled Center Leg extension northward from Massachusetts Avenue into a new tunnel way with an approximately 1400 foot radius curve to the north-west emerging immediately north of K Street, and with the roadways terminating into a direct feed to right turn only at a traffic light intersection onto New York Avenue. With this extension being built shortly after the 1976 decision to not build a continuous I-95 extension for D.C., it was designed more as an extension to connect the unfinished and unusable end of a truncated Center Leg to an existing arterial road, rather then as a continuous highway network. Hence, though its right of way was sufficient for an 8 lane highway, this extension would be built with only 4 lanes (2 per direction), with walls erected blocking off the rightmost lane and shoulder space for a storage area for the D.C. Department of Public Works.

Although the Center Leg extension – the tunnel from to – was started after the I-66 cancellation, its design anticipated both the North Leg West and the North Leg East: the former for its northbound carriageway being slightly wider to accommodate the left-hand ramp connection to I-66, the latter with its un-opened northbound tunnel on ramp.

(That ramp had its continuation irresponsibly blocked by the misplacement of the “Golden Rule” apartment building in 2002-2003).

Posted by Douglas Andrew Willinger at 2:40 AM