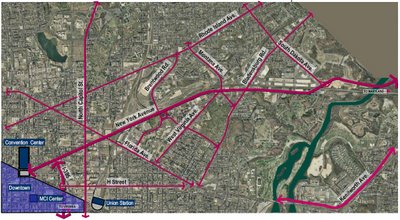 DCDOT NY Avenue Corridor Study
The I-395? New York Avenue Corridor extends from the existing I-395 truncation at 4th Street NW through Washington D,C. NE to the Maryland line, continuing east as the Route 50 (un-signed I-595/Theoretical I-66) freeway. Since the "de-mapping" of the New York Avenue Industrial Freeway, this corridor has come under official re-study. This started with the November 19, 1996 New York Avenue Development Report commissioned by the Office of the D.C. Mayor (then under Mayor Marion Barry). The considerations include possible underground connections to the Washington, D.C. Convention Center to the north of Mt. Vernon Square, and the I-395? New York Avenue Tunnel to connect and presumably continue I-395 easterly beneath that avenue in a cut and cover tunnel extending at least to the vicinity of Florida Avenue. The tunnel would connect I-395 with the general area of interchange "B" that would have connected to northern, eastern and south to west choices.

The recent studies address both this tunnel as well as the New York Avenue corridor further east.

All of the options now officially considered would have the tunnel surface onto a New York Avenue "Boulevard" without connecting to a parallel railroad-industrial highway.

The reluctance of the recent New York Avenue corridor studies to answer the question whether the I-395 designation would be applied make this I-395?

Although these studies fall short in crafting a continuous traffic-light free connection, lest it benefit more people, they include two grade separated options for New York Avenue's intersections with Montana Avenue and with Bladensburg Road: elevated on a berm, or depressed beneath a circular lid that incorporates an SPUI interchange with the lid shape and outer walkways emulating the shape of a classic D.C. traffic circle. 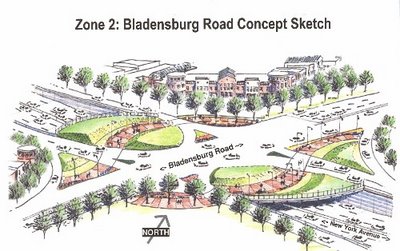 SPUI (Single Point Urban Interchange) with circular lid atop depressed NY Avenue
However, this planning cheaps out by denying this grade separated treatment for Montana Avenue.
Posted by Douglas Andrew Willinger at 6:48 PM