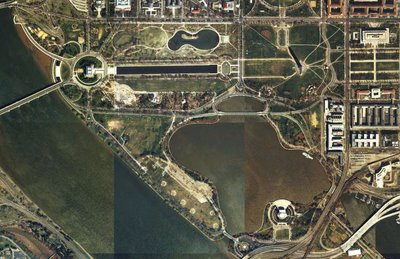 Image produced by National Capital Planning Commission for the Washington Geographic Information System. Distributed by VARGIS LLC of Herndon, VA.
The South Leg of the Inner Loop would connect the I-66 West Leg with the SW Freeway. It first appears in the 1955 Inner Loop study, with the subsequent planning placing an emphasis upon constructing this highway link in a tunnel.

Most of the route was to be a surface design, with short tunnel beneath the traffic circle just west of the Lincoln Memorial, emerging to follow Ohio Drive with 2 lanes per direction along the surface along the Potomac River, before meeting the South West Freeway at the 14th Street Bridge.

Alternate Plan with short tunnel beneath the traffic circle just west of the Lincoln Memorial, emerging to follow Independence Avenue with 3 lanes per direction. 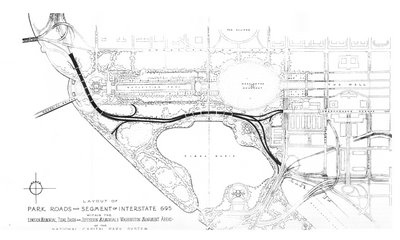 1963 Public Hearing Plan
This plan was presented at a public hearing on November 3, 1963, by the National Park Service and the D.C. Department of Highways and Traffic.

Like the 1955 design, this featured a 6 lane tunnel just west of the Lincoln Memorial, though longer at about 1,300 feet, and continuing to a point south-east of 23rd Street SW as this route began to turn to the east, to meet the alignment of Independence Avenue to a second tunnel segment dropping to about 37 feet below sea level directly beneath the Tidal Basin just north of the Kutz Memorial Bridge. A depressed roadway surfacing south of the floodgate structure at 15th Street was to connect this tunneled section with the South East Freeway, with a ramp connection to Independence Avenue at 14th Street.

This plan would have the support of governmentally affiliated bodies, the National Capital Planning Commission, the Commission on Fine Arts, plus private groups. As so quoted by The District of Columbia Department of Highways and Traffic" January 1970 report "Recommendation for the South Leg Freeway Alignment", the Committee of 100 on the Federal City commented,

"The South Leg proposal, sponsored by the Park Service, is expertly conceived ... we enthusiastically support it."

According to this January 1970 report:

The original 1963 plan was approved by the Bureau of Budget, and proceeded to the detailed design stages. Contract drawings for the Lincoln Memorial Tunnel were advertised for bids on June 24, 1965. The invitation for bids was canceled out of deference to the proposed Mall Master Plan which was being proposed at the time. 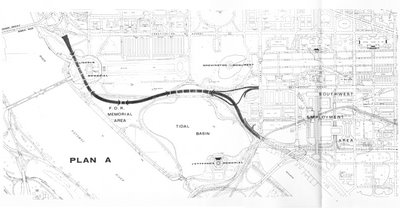 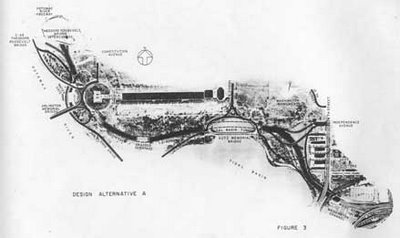 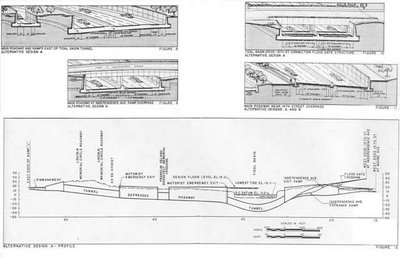 The 1963 plan was superseded by a modified version that, for the purpose of saving the trees along Independence Avenue, differed in its alignment for that portion of the route: instead, this version was to cross just south of Independence Avenue, to enter a short (about 250 foot long) grassed overpass tunnel, before crossing to the Avenue's north to enter the tunnel beneath the Tidal Basin. Like the 1963 plan, it was to be about 1/3 tunnel, and 2/3rds open-depressed, largely designed to be converted into a full tunnel at some future date.

The concept of the 1963 plan has been refined in Plan A in response to the desire to find a more suitable alignment compatible with comments of the Fine Arts Commission and to reduce costs. Though a cooperative effort between the Department of Highways and Traffic, the National Capital Planning Commission and the National Park Services staffs many details of the plan have been investigated. 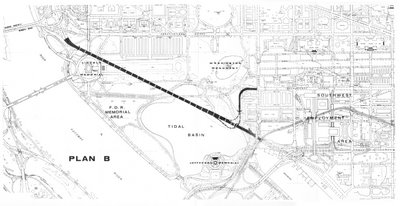 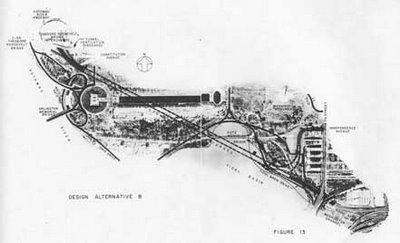 Alternative "B" the diagonal tunnel 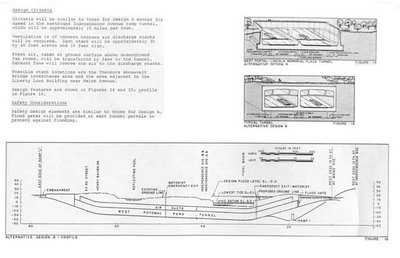 In 1966, a new design appeared, featuring a single continuous, 5,600 foot long West Potomac Park tunnel, constructed by the cut and cover method, upon a diagonal routing fully east of Lincoln Memorial traffic circle and partially beneath the Reflecting Pool. Because of its continuous length, this was the one option featuring ceiling ducts for a ventilation system. Under this plan, the surface roads in West Potomac Park were to be removed.

This design, initially pursued as a full tunnel alternative to the previous design, was approved by the National Capital Planning Commission on September 15, 1966, and recommended to the D.C. Board of Commissioners for implementation. However, this diagonal route tunnel proposal came under criticism by the Fine Arts Commission at a meeting on September 20, 1967, for reason of its destruction of two spots of mature trees that flank the Reflecting Pool, which would require more than a generation for transplanted replacements to grow to the same size as the removed trees. Hence, the D.C. Department of Public Works would back away from this design at a closed door, Tuesday meeting of the National Capital Planning Commission, reported by a Jack Eisen article in The Washington Post on October 30, 1969. Accordingly, for reason of entirely avoiding the trees along the Reflecting Pool, the earlier plan, regained its earlier status as the largely officially preferred plan. Ironically, while this tunnel was not built, the trees it would have displaced and replaced along the north side of the Reflecting Pool were displaced and replaced for other reasons.

The engineering and construction costs for this design of this 6 lane, 1.5 mile project were (in 1972 U.S. dollars) $10,710,000 and $119,000,000 respectively, for a combined cost of $129,710,000. There were to be no right of way expenditures because the project was entirely within public lands. During the early 1970s, this design was known as "Plan B". This design appears to be an evolution of a relatively little remembered 1965 effort that included options"B" under the main portion of the Tidal Basin, and "C" for a tunnel under Ohio Drive. 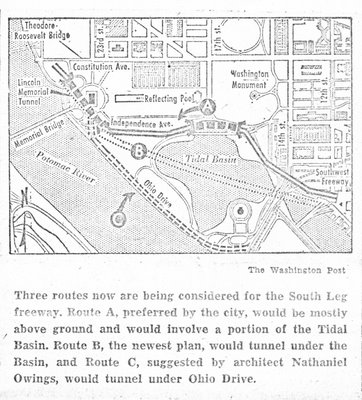 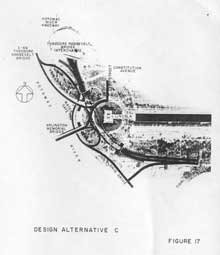 Alternative "C"
A shorter, less ambitious proposal (though nonetheless easy to build upon as the basis of a future tunnel extension) meanwhile, would have constructed a tunnel section to the west of the Lincoln Memorial (essentially the same tunnel design composing much of the western portion of the 1963 and 1963 modified design proposals, through extending slightly further east), so modified to feed directly upon to Independence Avenue, so rebuilt to descend below grade to the west of 19th Street SW. As essentially the western portion of "Plan A", "Plan C" could ultimately be extended (with a minimum amount of demolition and repetitive construction) to becoming "Plan A" (or some variant), via a future tunnel extension easterly beneath Independence Avenue to connections to that Avenue and the South West Freeway.

On February 17, 1970, the D.C. City Council would endorse this plan, with any future extensions by tunnel only.

Each of these 3 latter design proposals for the I- 695 South Leg Freeway were designed to prevailing Federal Highway Administration interstate highway standards: Official Design Choice:

Suggestions from those favoring a South Leg would lead to the choice of "Plan A", so designed with the necessary walls and space for lateral ventilation ducts, in order to allow the future conversions of much of its uncovered depressed sections into a full cut and cover tunnel. In a letter by Tom Aires, Director of the D.C. Department of Highways and Traffic to D.C. Mayor Washington, dated May 8, 1973:

As a result of the evaluation of public hearing testimony, agency review comments, environmental and transportation data, and government policies, the Department of Highways and Traffic recommends the location of the South Leg as depicted in Alternative A and a design modification of Alternative A. In the interest of minimizing harm to the public lands involved, a third 1,300 foot long tunnel [segment] was added to the Alternative A design to provide 3,900 feet of underground roadway. The design permits the ultimate conversion from three separate tunnels to one continuous tunnel of approximately 5,000 feet in length when all vehicles are conforming to the 1975-1976 emission control standards.

According to the January 1970 report:

In summation, the above outlined transportation planning reflects a total agreement among planning agencies that the South Leg link between the Potomac River Freeway and the Southwest Freeway is a vitally necessary traffic carrying component of the transportation system for the District of Columbia. At present, traffic is carried on the surface via Independence Avenue though this corridor. The surface roadway is deficient in two basic respects.

Firstly, through traffic capacity is insufficient because of unavoidable traffic turning movements at intersections.

Secondly, the vehicular use of the surface roadway conflicts with the use of this important area by park visitors.

The objective is to free this important park area of traffic roadways and provide a facility capable of handling a volume of 90 - 100 thousand vehicles per day.

The I-695 South Leg was not much of an object of opposition until the early 1970s, as it did not displace anyone, and was designed to ultimately bury much of an existing road-link, by replacing surface Independence Avenue SW. Though there were objections to an open depressed roadway segments, these were to be covered as tunnel in the future, hence the environmentalist arguments are open to interpretation, as well as an intellectual scrutinization.

Many of those testifying at the September 6-7, 1972 Public Hearings though would go on record opposing any South Leg project, such as Peter S. Craig, a lawyer, for the Committee of 100 on the Federal City, who wrote the following in a letter to D.C. Mayor Washington dated November 13, 1973, in opposition to building any South Leg:

"...from my review of the "Combined Corridor and Design Report", it is obvious that Mr. Aires is preceeding from demonstrably erroneous or obsolete premises, errors that would be manifest if there were an adequate hearing. For example, his report proceeds from the assumption that there will be a 50 percent increase in area population by 1990 with a 100 percent increase in auto travel. Such an assumption is incredible in he face of (1) recent actions by EPA under the Clean Air Act looking toward the necessity of reducing future auto travel and (2) the growing fuel crisis which, according to Administration spokesmen, will lead to gas rationing within six months and, by 1990, may well render the private automobile as obsolete as the horse and buggy." [!!!]

Some opponents would resort to out-right misrepresentations as this photo-mock up illustrating a tunnel portal with a transition to a surface roadway displacing the Reflecting Pool due east of the Lincoln Memorial! 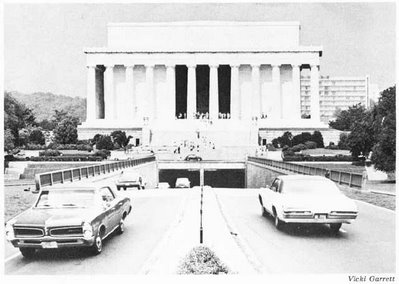 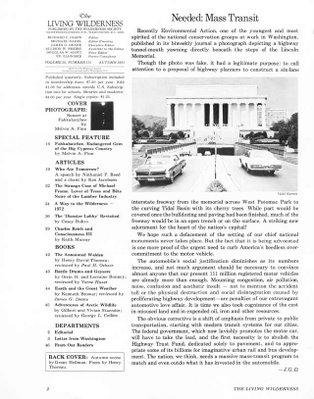 With construction scheduled to be underway by 1976, concern about the disturbance of construction during the nation's bicentennial celebrations became a justification by D.C. Mayor Washington to put the project's start on indefinite hold. Afterwards, the project was "de-mapped" to siphon its funds to speed WMATA construction by a few months, particularly for projects outside of Washington, D.C.

This writer does not know why the authorities prioritized the South Leg which would connect I-66 to the under-capacity SW Freeway, rather then the North Leg K Street Tunnel which would extend I-66 independently of the SW/SE Freeway.
Posted by Douglas Andrew Willinger at 6:01 PM