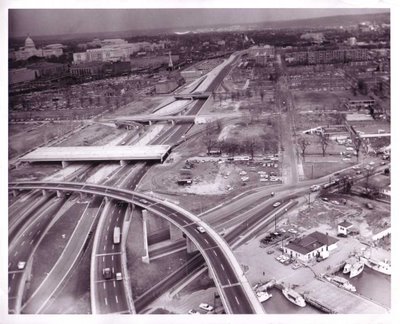 DDOT Historical Photos Archive
The SW/ SW Freeway is the east-west segment of Washington, D.C.'s Inner Loop Freeway system that was built (cir. 1959 to 1974). The SW Freeway runs along the axis of F Street SW in a landscaped trench to 7th Street SW, where it transitions to an elevated viaduct to cross over South Capitol Street, where it becomes the SE Freeway, paralleling the north side of the railroad.

It appears in a 1952 proposal as a freeway approach in Washington, D.C. to concurrently proposed Washington Chanel Bridge and the parallel span[s] to the 14th Street Bridge connecting to Virginia's Shirley Highway; under these earlier plans the South West Freeway would have consisted of a 4 foot median barrier separating a pair of 33 foot wide roadways, flanked by 60 foot wide sloped embankments. it would transition to a set of surface streets. This proposal did not include a South East Freeway, or other parts of what would be the Inner Loop Freeway, but rather a series of interim proposals of surface street widening's and one way conversions.

It first appears as part of a continuous freeway system in the 1955 Washington, D.C. Inner Loop proposal. It would occur as part of an overall redevelopment of Washington, D.C. SW involving wholesale building demolition, with that for the freeway being but a small percentage.

Illustrations from the 1955 Inner Loop study
Although the SW Freeway and the north-south Center Leg are to serve as I-95 this 1955 plan provides less then optimal capacity for the sake of avoiding a wider highway even though that would not save a single building, along with only a single lane connecting to the northbound Center Leg.

Curiously, the SW Freeway is routed along F Street rather then to the south, hence resulting in its roadways obscuring the vista to and from the Jefferson Memorial, along with a sharper radii for the transition connections with the Center Leg.

No apparent consideration was given to a wider, covered SW Freeway routed a bit to the south.

According to Steve Anderson's D.C. Roads

Construction under the first contract began at 4th Street SW in December 1957. Work under a second contract from 4 Street east to the "Center Leg" interchange began in January 1958, while construction of the remainder of the route - including the Washington Channel Bridge - got underway in March 1959. In 1960, District officials requested a shift in funding from other parts of the Inner Loop toward completion of the Southwest Freeway. Under the revised schedule, work was accelerated on the section between the 14 Street Bridge and 9th Street SW. This section was opened to traffic on July 31, 1962.

The remainder of the Southwest Freeway from 9th Street SW to South Capitol Street was completed on August 26, 1963. Construction crews built stub roadways for the future Southeast and Center Leg freeways, on which work continued into the early 1970's District officials rushed to get this final section of the Southwest Freeway finished in time for the crush of crowds anticipated for the massive civil rights march on the Mall in which Dr. Martin L. King, Jr. gave his "I Have a Dream" speech.

Further construction of I-695 was delayed by the lack of a final decision on the future of "Interchange C" and the East Leg freeway. In 1968, after several years of heated protest about condemnation procedures, the District government reached a compromise agreement that authorized construction of the Southeast Freeway east to Barney Circle (Pennsylvania Avenue), freeway approaches to the 11th Street Bridge, and a downsized "Interchange C" that would connect the two freeways. There were no provisions in the new "Interchange C" for the East Leg [along 11th Street NE/SE), whose construction was deferred indefinitely.

The final short section of the Southeast Freeway connecting "Interchange C" with Pennsylvania Avenue was completed in 1974. With the cancellation of the Barney Circle Freeway in 1996, the interchange with Pennsylvania Avenue forms the primary connection between the Southeast Freeway and the Kenilworth Avenue Freeway / Baltimore-Washington Parkway corridor (DC 295-MD 295). An underpass beneath Barney Circle was part of the project, but today this underpass - which was to accommodate six lanes of I-695 traffic - stands mostly unused except for traffic bound for Robert F. Kennedy Stadium. 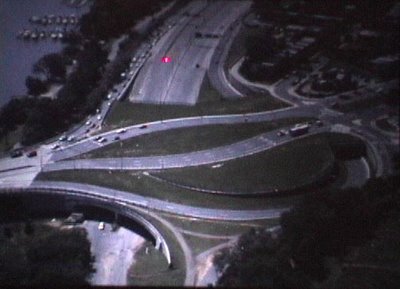 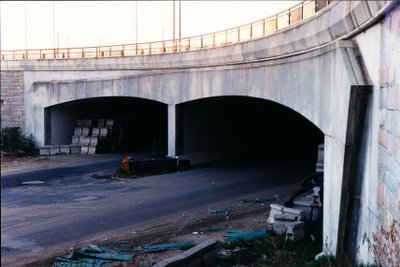 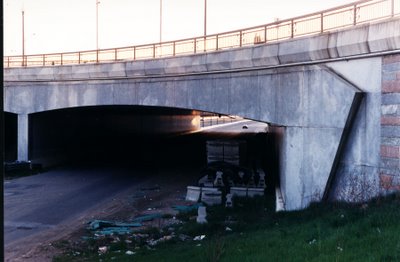 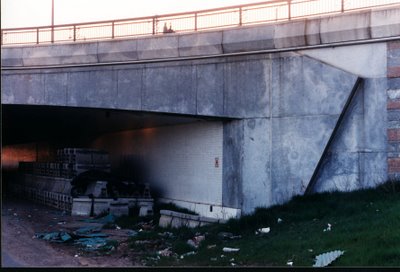 http://www.dcroads.net/roads/southeast/
Posted by Douglas Andrew Willinger at 4:20 AM